Craglorn is a region situated in northeastern Hammerfell between Bangkorai and Cyrodiil. The zone can be entered at any level via the gate in Bangkorai, and it is also possible to travel to Craglorn via cart from the Alliance capital cities, Elden Root, Mournhold, and Wayrest. The main storyline revolves around the disappearance of the constellations from the sky.

Originally designed as a Veteran-only 4-player Adventure Zone, Craglorn was overhauled in the One Tamriel update and is now a hybrid zone containing both solo and group content, open to players of any level. Areas involved with the zone's main storyline can all be tackled solo, as can the majority of the overworld. "Group Areas" are denoted with a plus sign on the world map and are aimed at groups of 2 to 4. Craglorn also contains several 12-player trials, as well as the 4-player Dragonstar Arena.

Craglorn is split into three regions. Lower Craglorn comprises the two in the south of Craglorn, centered on the town of Belkarth. Upper Craglorn lies to the north, with the town of Dragonstar at its western end. Access between Upper and Lower Craglorn is by a rocky pass in the west, or through a sundered Iron Orc barricade in the east.

Delves in Craglorn with a + icon are Group Delves, which are instanced and aimed at groups of 2 or more.

Places with a plus sign + on the icon are designed for groups of 2-4 players.

The following Points of Interest do not count towards Zone Completion:

Places with a plus sign + on the icon are designed for groups of 2-4 players, containing large groups of monsters and a boss monster of tier 3.

These locations were originally listed as Group Events, but now function similarly to normal World Bosses.

When Craglorn was originally released, everything was scaled to require a group of 2-4 players. However, since the One Tamriel update, all of the actual Main Story Quests of the zone have been reduced in difficulty and are now designed to be tackled solo. All these quests' boss-type monsters reduced from tier 2 or tier 3 (normally group-level bosses) to tier 1, equivalent to a Delve boss in normal zones, and reduced numbers in the groups of normal monsters. Exceptions are The Shattered and the Lost and The Corrupted Stone, which remain designed for groups (or at least for players capable of soloing World Boss level monsters), but these quests are now optional rather than compulsory.

All other side quests remain aimed at groups of 2-4 players, with the exception of The Gray Passage, Iron and Scales, and Taken Alive: these three take place in areas that were required for the Main Story Quests, and thus their difficulty has similarly been reduced to solo levels. Also, the three one-time sidequests in Lower Craglorn (Gem of the Stars, Message Unknown and Strange Lexicon) could be regarded as easily soloable, since although all three take place in Group Delves, none of them require killing the delve boss (a tough tier 2 designed for groups of 2-4). 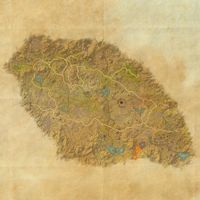 A map of Craglorn
Retrieved from "https://en.uesp.net/w/index.php?title=Online:Craglorn&oldid=2500797"
Categories:
Hidden categories: