The UESPWiki – Your source for The Elder Scrolls since 1995
< Elder Scrolls Online: Quests: Craglorn / Side Quests
Jump to: navigation, search

Safa al-Satakalaam, a priest of Satakal, is at odds with the Scaled Court. Three of her most powerful acolytes have deserted her to worship the Celestial Serpent. She wants me to punish these traitors and deny their power to the Scaled Court. 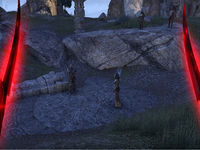 "Say, Regent Soteras, do you think anyone might be watching us right now?" 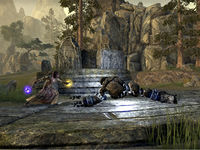 On the upper floor of Dragonstar inn there is a woman called Safa al-Satakalaam who offers you "a dangerous but very profitable" task. Safa belongs to a cult called Satakal, however, three of her acolytes have left their old cult and joined the Scaled Court instead. Your task will be to find the cultists and punish them accordingly. The cultists are spread out along the southern parts of Upper Craglorn.

Mazaluhad is found west of Valley of Scars Wayshrine, across the narrow river. He is conversing with Regent Soteras about the new recruits. You will have to fight them both, plus the assisting cultists. While Mazaluhad is fighting in melee, Soteras is a caster. Mazaluhad has more health than his friend, but is more likely to die first simply because he getsin your way and keeps the heat off his ally.

Anyaq can be found northeast of Valley of Scars Wayshrine, near the road running through Iron Orc Nirncrux Mines. He is manipulating a storm atronach, Zymel Ozarus, who will assist him in combat. Beware the atronach's strong lightning attacks. If you concentrate on killing Zymel Ozarus first, it will die before its master.

When you have defeated all three acolyte deserters, return to Safa to inform her that you have completed the task. She comments on you looking unexpectedly healthy after such a difficult task, and concludes that perhaps she might need to train her acolytes more diligently.

Notes
* Any text displayed in angle brackets (e.g., <Alias=LocationHold>) is dynamically set by the game and will be filled in with the appropriate word(s) when seen in game.
Retrieved from "https://en.uesp.net/w/index.php?title=Online:The_Truer_Fangs&oldid=2214452"
Categories:
Hidden categories: