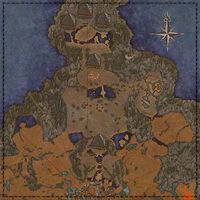 A map of Fist of Stone

The Fist of Stone is the northern region of Coldharbour. The Reaver Citadel sits in the center of it, and the crypts of the Orchard lie to the south. To the north is the Endless Stair. The southern border is formed by the Shrouded Plain to the west, the Black Garrison to the east, and the Hollow City to the south.

This area is notable for being locked off to characters until they complete Crossing the Chasm. Teleporting into the area will unlock wayshrines as normal.