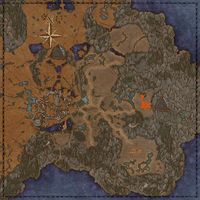 A map of Black Garrison

Black Garrison is the southeastern region of Coldharbour. It contains the Everfull Flagon to the south. The Fist of Stone lies to the northeast while the Hollow City and Shrouded Plain form the border to the east.