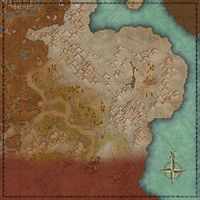 A map of the Icewind Peaks

The Icewind Peaks is the southeastern region of Eastmarch. It includes the towns of Wittestadr and Cragwallow on its northern border, but the south is too mountainous to be very populated. The ancient ruin of Skuldafn sits on a mountaintop to the east. The Icewind Peaks Dolmen lies roughly in the center of the region, in the hills southeast of the towns. It borders The Rift to the south. The Giant's Run region lies to the north, while Frostwater Tundra borders on the west.