The UESPWiki – Your source for The Elder Scrolls since 1995
< Lore: History(Redirected from Online:Planemeld)
Jump to: navigation, search

The Planemeld was a monumental Daedric invasion of Tamriel that took place in 2E 582, during the Interregnum. The Daedric Prince Molag Bal used Dark Anchors, huge Daedric interplanar machines of his own design, in an attempt to drag Nirn out of Mundus and into his realm of Coldharbour.[1] Rifts of darkness that lead from Tamriel directly to Coldharbour appeared across the continent. Each death in Tamriel weakened the barriers between Nirn and the realms beyond, and the concurrent Three Banners War only accelerated the Planemeld.[2] The scale of the Planemeld is comparable to that of the Oblivion Crisis. The Planemeld was ultimately stopped by the Vestige with Meridia's assistance.[3][4]

In 2E 576,[5] Emperor Leovic of the short-lived Longhouse Dynasty legalized Daedra worship throughout the crumbling Empire of Cyrodiil. After hearing of this, Duke Varen Aquilarios of Chorrol mustered the forces of the Colovian Highlands to depose Leovic.[6] Thus began a bloody year-long revolt,[5] which Duke Varen waged with the necromancer lord Mannimarco's counsel.[7] Varen based his rebellion out of Bruma, where he coordinated his troops as they liberated Cyrodiil's other cities to further weaken Leovic's hold over the Empire. The rebellion claimed victory when Varen's forces stormed the Imperial City, and Varen personally dispatched Leovic at the foot of the Ruby Throne before proclaiming himself emperor.[8]

After Varen claimed the White-Gold Tower, he wished to legitimize his claim to the Ruby Throne by lighting the Dragonfires, as all true Emperors must. This could only be done by a Dragonborn, one with the blood and soul of the dragons—which Varen was not, just like Leovic before him. Mannimarco, now the chief advisor of Varen's court, convinced the emperor that a modified version of the coronation ritual would not only light the Dragonfires, but convince Akatosh to grant him the Dragon's blood. To do this, they needed the Amulet of Kings, which was lost in the years following the fall of the Reman Dynasty.[7]

Thus, the Five Companions were formed in 2E 577: Varen Aquilarios himself, the sorcerer Mannimarco, the half-giant warrior Lyris Titanborn, the Redguard blademaster Sai Sahan, and Grand Chancellor Abnur Tharn. They set out on a two-year quest to find the Amulet of Kings.[7]

A vision of the Soulburst

The Five Companions were able to retrieve the Amulet of Kings, and begin the ritual in 2E 579.[7] The Five gathered at the Temple of the One in the Imperial City, and began the ritual. At that moment, Mannimarco revealed his true intentions: he was an agent of Molag Bal. The ritual would not reignite the Dragonfires, but in fact did the exact opposite: weakening the ancient barriers protecting Nirn, and setting the mortal realm adrift in Oblivion[2] in an event known as the Soulburst.[9][10]

This event allowed Molag Bal to initiate the Planemeld. As the Soulburst occurred, magical aftershocks swept across every corner of Nirn. Mages died or went mad, Red Mountain trembled, earthquakes shook Skyrim, and heavy storms devastated the coastlines of Elsweyr and Valenwood. The constellation of the Serpent grew so large that it seemed to threaten every star sign at once.[2]

Consumed by the fires of the Soulburst, Varen Aquilarios vanished. He was officially declared dead[6]—a fact which Mannimarco used to implicate Lyris and Sai in the emperor's supposed regicide. Lyris was captured by Mannimarco, while Abnur pledged his allegiance to Mannimarco in a bid to preserve the Empire. Sai Sahan fled with the Amulet of Kings, securing the artifact within the depths of Sancre Tor.[7]

Afterwards, the Tharn family, who were now the new rulers of Cyrodiil through Varen's widow, Empress Regent Clivia Tharn, made a secret pact with Mannimarco. The King of Worms agreed to strengthen the Imperial armies by resurrecting their fallen soldiers.[citation needed] Abnur, Clivia's father, grew a deep hatred for Mannimarco after the Soulburst. He was soon brought to the Castle of the Worm in Coldharbour and imprisoned there.[11]

After the fall of the Longhouse Dynasty but before the Soulburst, Mannimarco approached Ard Caddach of Markarth with a proposition. The Reachfolk were embittered by Varen's rise to power. Durcorach's conquest of Cyrodiil saw the Reachmen's land returned to them, and the rise of the Longhouse Dynasty was a point of pride for the Reach. Mannimarco pledged justice for Caddach's people in exchange for allowing the Worm Cult shelter in Markarth. Eventually, Mannimarco delivered: because of the Soulburst, Varen lost his throne, his lands, and (as far as the Ard was concerned) his life.[12]

Following the Soulburst, Mannimarco spent a good deal of time in Markarth. He and his Worm Cult were granted access to the ruins of Nchuand-Zel by Ard Caddach, who was grateful to Mannimarco for bringing about the downfall of Varen Aquilarios.[13][14] Caddach gave him a sizeable portion of land in the hills near Markarth for experimentation. Mannimarco performed a ritual to meld this land with Coldharbour, but his attempt failed; the land was sundered from Tamriel,[13] but was not sent to Coldharbour, instead becoming lost in Oblivion. However, Mannimarco was able to use the knowledge he gained from this failure to initiate the Planemeld.[12] This sundered land would become the lost realm of Grayhaven.[15] 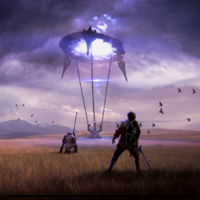 The Planemeld began in 2E 582. Transliminal portals called Dark Anchors were summoned throughout Tamriel, hooking into the ground and slowly ripping parts of Nirn away to float loosely in Oblivion. These portals were all metaphysically moored to a colossal construction in Coldharbour called the Great Shackle. The Planemeld was centered on the Endless Stair, a fortified impossibility constructed by the Mad Architect.[16] Once an area was sundered from Tamriel, the pieces would reform as a pocket realm of Coldharbour before joining the Planar Vortex, an inter-planar realm where Tamriel and Coldharbour converged.[3][4] Although fragile, the Vortex could only be accessed from within the Endless Stair. The largest Dark Anchor opened above the skies of the Imperial City, intent on pulling the White-Gold Tower itself into Coldharbour.[17]

With Cyrodiil in ruins and the provinces divided by the Alliance War, few were left to oppose the invading Daedra. Meridia had her servant, Sees-All-Colors, assassinate the leader of the Fighters Guild in order to assume the role of guildmaster. Under Daedric command and funded by the wealth of Meridia's worshippers, the guild began refusing all other contracts and focused its efforts on destroying Dark Anchors and opposing Molag Bal's schemes. Meanwhile, the Five Companions were reformed by the arrival of the prophesied Soulless One,[18] who freed the Companions from Bal's clutches and reclaimed the Amulet of Kings, defeating Mannimarco in the process.[19] 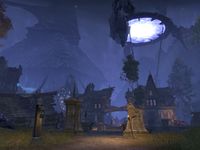 As the Alliance War dragged on, Molag Bal's power over Tamriel continued to grow. Together with the Fighters Guild, the Mages Guild under Vanus Galerion finally arranged for a meeting of the three alliance leaders on the island of Stirk to discuss a potential counter-invasion of Coldharbour. Before an agreement could be reached, Molag Bal sent Daedra to the island to kill the alliance leaders. Although the attackers were repelled, the leaders quickly consented to a guild-led invasion, having seen Bal's influence firsthand.[20]

Although initially scattered across the realm, the invasion force quickly reassembled in the Hollow City, a sanctuary of Meridia within Coldharbour.[21] After destroying the Great Shackle and breaking through the a great citadel that served as Molag Bal's last line of defense, the "Army of Meridia" was granted access to the Endless Stair by the restored Foolkillers Clan.[22] A small group entered the Planar Vortex with Meridia. Their goal was to unleash the Light of Meridia at the focal point of the Vortex, a task which Meridia aided in by distracting Molag Bal. This artifact destroyed the vortex entirely, setting back all progress Bal had made on the Planemeld.[3][4]

Thinking themselves victorious, the invasion force returned to Tamriel. However, Molag Bal had simply retired to his palace at Heart's Grief, and planned to attempt a second Planemeld when he eventually recovered his strength.[23]

In a final attempt to restart the Planemeld,[UOL 1] Bal sent a Xivkyn called Molag Kena to pose as the seemingly-deceased Empress Regent Clivia Tharn and "retake" the White-Gold Tower. In truth, Kena sought an Elder Scroll within the Tower and planned to use its power to initiate the "Planemeld Obverse" and begin simultaneously pulling Coldharbour into Tamriel. However, a moth priestess called Terran Arminus had read the scroll before the Daedric occupation of the Imperial City, and had learned that she would need aid in order to save the scroll. This aid arrived in the form of a group of Undaunted, and the prophesied Soulless One, who helped Clivia's entourage ascend the shattered reality of the Tower's upper levels before being betrayed by the imposter. These heroes defeated Molag Kena atop the Tower before she could fully complete the ritual, and in the process destroyed the Anchor above the city.[24][25]

Coinciding with the events at White-Gold Tower, Bal's forces began to search the city for a relic called the Sublime Brazier. Housed in the hidden Dragonfire Cathedral in the Ayleid ruins beneath the city, this brazier was key to relighting the Dragonfires.[26] If it was destroyed, Akatosh's Covenant would be broken and Mundus would be eternally vulnerable to Daedric invasion. This plot was uncovered by the Drake of Blades, a mysterious Dragonguard agent still operating within the city. With the help of the Vestige and other allies, the Drake entered Dragonfire Cathedral and performed a ritual to become the brazier's immortal guardian. The Daedric siege of the cathedral was lifted in the process, and the leader of Bal's forces, Xivkyn General Malivus, was banished.[27] The Drake would serve as guardian for all time, effectively foiling Molag Bal's plot.

In order to stop any future attempts at another Planemeld, the Five Companions journeyed to Heart's Grief and confronted Bal using the Amulet of Kings. Mantling the power of Akatosh, the Vestige faced the Prince in single combat and banished him to the Void, freeing the souls and restoring the land he had captured, and ensuring the erasure of what remained of Molag Bal's hold over Nirn.[28]