The UESPWiki – Your source for The Elder Scrolls since 1995
< Elder Scrolls Online: Quests: Undaunted / Cyrodiil
Jump to: navigation, search

The Daedra have occupied the White-Gold Tower, and I have agreed to help Moth Priest Terran Arminus retrieve an Elder Scroll left inside the Tower Library. 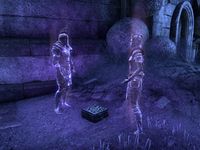 Empress Regent Clivia Tharn is looking to retake the Daedra-infested White-Gold Tower. She is accompanied by a moth priest, Sister Terran Arminus, who seeks to retrieve an Elder Scroll that she hid within the Lower Elder Scroll Library when the Daedra invaded the Imperial City. Your job is to climb the tower and retrieve the Scroll.

Along Green Emperor Way, Xivkyn and their zombie thralls block your path. In front of the tower's entrance is a Flesh Colossus, The Iron-Swathed Glutton. Defeat it to get into the tower. You'll need to defeat The Adjudicator before you can begin your ascent. When you reach the Lower Elder Scroll Library, Sister Terran Arminus will reveal the Elder Scroll from its hiding place. The Empress Regent will steal the scroll and order her bodyguards to kill you. Defeat the Elite Guard and pursue Clivia Tharn up the White-Gold Tower, through the Shattered Void. 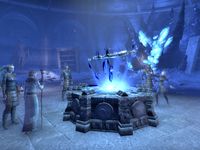 The scroll is revealed

The next room full of enemies you encounter has some Xivkyn lazing about. Sister Terran will reveal some hidden Planemeld Rifts that you need to destroy. Neglecting to destroy these rifts will result in Daedric reinforcements pouring out of said rift, so destroy them quickly. You can only destroy them if you are chosen to do so. You can tell that you have been assigned rift duty if your screen turns grey. Kill the Daedra, destroy the rifts, and press on.

Eventually, a Daedric Titan will block your path. Defeat it and watch as Clivia Tharn summons a Cold-Flame Atronach, the Planar Inhibitor, and continues her escape. As soon as the gate opens, jump down into the ruined section of the tower and engage the Planar Inhibitor. Once the atronach is defeated, follow Clivia.

At the tower's summit, Clivia Tharn will reveal herself as an impostor, sent by Molag Bal to steal an Elder Scroll and carry out a plan the false Empress Regent refers to as the "Planemeld Obverse". Defeat Molag Kena and Sister Terran will arrive through portal. She reclaims the scroll and opens a portal to the base of the tower. Speak with Sister Terran Arminus at the base of the White-Gold Tower for your reward.

This Elder Scrolls Online-related article is a stub. You can help by expanding it.
Retrieved from "https://en.uesp.net/w/index.php?title=Online:Planemeld_Obverse&oldid=2375395"
Categories:
Hidden categories: