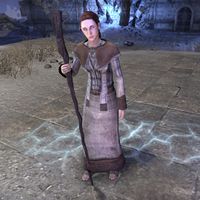 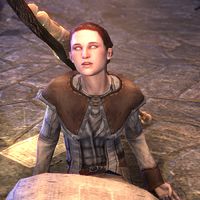 Sister Arminus with the Elder Scroll

Sister Terran Arminus is an Imperial moth priestess found inside the White-Gold Tower.

Sister Arminus can first be overheard speaking with the Empress Regent in the Palace Sewers.

She can then be approached where she seems to recognize you, despite not having met before.

"You're finally here! You stink of blood, but I thought you'd smell fouler with everything you've been through.
You'd think I'd be used to it by now."
What are you talking about?
"Absolutely nothing. And everything.
How would you like to help a humble Moth Priest and the Empress Regent herself with an urgent, even critical task?"
What task is this?
"One destined for you. Daedra have overrun White-Gold Tower. We would flee were it not for a certain relic left in the halls above.
We need to get it back. The existence of the Empire depends upon it."
I'll help you get it. What is it?
"The relic is an Elder Scroll, sequestered in the library of the White-Gold Tower. It's surrounded by minions of Molag Bal. But they can't get to it—not yet.
We hope to get to it first. But we need you to take us through the throne room to reach it."

How do you know all this?
"It was written in the Elder Scroll in question. I was its keeper, and am destined to become so again, with your help."

What evidence do you have?
"A good question! The Scroll doesn't help with that part.
But you've trusted the words of others before, on whim or by necessity. You could leave, I suppose. Doom us all. Doom my cat. I like my cat."

[Persuade] You're not helping.
"Oh, and I suppose your existence makes sense, Soulless One? You're nonsense on legs.
Trust me on this. Trust the Scroll. This is fate unrolling before us."[verification needed]

Tell me about this Elder Scroll.
"It's very old. Very secret. And it told me of events to come.
It told me that we have great work to do, you and I."

What do you mean?
"It's … easier to show you. Come, we have a throne room and an Elder Scroll to reclaim."

Who are you, exactly?
"I'm the last of the Moth Priests remaining in the Imperial City.
And with me are Empress Regent Clivia Tharn and her personal guard."

Where are the other Moth Priests?
"Tending to their studies, I'm sure, elsewhere in the world. Elder Scrolls and Daedra don't mix."

So why is there an Elder Scroll still here?
"I left it here before the Daedra invaded.
Not carelessly! On purpose."

Why?
"You'll know more in time. Come, let's retrieve it."

After killing The Adjudicator:

Otho Numida: "Secure the perimeter!"
Cordius Pontifio: "The Empress should have been the first to set foot in the Palace."
Sister Terran Arminus: "We make for the library, and from there, the Elder Scroll!"

She can be spoken to at this point.

"You've succeeded where the Imperial Legions have failed! the [sic] Daedra have defiled the Ruby Throne for months on end.
Come! All proceeds as it should. We move for the Elder Scroll."

How can you be sure about this?
"I read it the Scroll. It can be very specific. Occasionally.
I haven't been wrong yet, have I? I'll answer that: no, I haven't. And I won't! You know, be wrong."

What's next?
"The library is up ahead. The Elder Scroll will be there.
I've spent years staring into darkness, waiting for this crux, for this focus. For today."

After entering the library, the following scene will occur:

Once the Regent's personal guard is defeated:

Sister Terran Arminus: "I had hoped the Scroll was wrong about Clivia. Go! Find the Empress Regent!"

"I suppose the Scroll is never wrong, but I had hoped ….
Go. You have to find her. All the pieces are in place to bring about a conclusion—for good or ill."

Sister Arminus will make several comments as you chase Clivia Tharn up the tower. When you get to a point where Planemeld Rifts appear:

Defeating the waves of Daedra from the Rifts:

Sister Terran Arminus: "The Planemeld is as majestic as it is terrible. I guess it's mostly just terrible."

Approaching the Scion of Wroth:

Sister Terran Arminus: "Stay calm! Everything you see is just your mind trying to make sense of merging realities!"

When you have caught up to the Empress Regent, Sister Terran will plead with her to stop.

Sister Terran Arminus: "This won't end well for you, Your Majesty! Leave the Scroll! Stop this!"
Empress Regent Clivia Tharn: "You underestimate me, wretch!"

During the fight with the Planar Inhibitor:

Once the Planar Inhibitor is dead, the chase begins anew.

Sister Terran Arminus: "After her! The time has come! You must face her, before she slays us all!"

Sister Terran Arminus can be spoken to before pushing forward.

"It's time for you to face Clivia Tharn. I don't know what stake she has in this, but it can't be in the Empire's interest.
You'll find her through the portal ahead, at the top of White-Gold Tower. Divines go with you. And my cat."'
Why would the Empress Regent betray her people?
"I couldn't sense her motive from the Elder Scroll—it said something about "shadows of shadows."
The Scrolls are never wrong, but I wish I understood why she's doing it. It's like I don't know her anymore."
Why? You believed everything else.
"Clivia Tharn was haughty and selfish, but she was an Imperial from head to toe. She'd never betray Cyrodiil. Not like this."
People have their reasons for siding with the Daedra.
"No. There's more to it than that. For one thing, the Empress Regent I knew was too aristocratic to open doors for herself."

Reaching the portal to the top at White-Gold Tower Pinnacle:

Sister Terran Arminus: "Head through the portal! You are destined to face Clivia Tharn."

"Reality is bends around us. Local Mundus is in flux.
The pinnacle of White-Gold Tower is straight ahead, through that portal. That's where you'll find Clivia."[verification needed]
"The portal ahead will take you to the Tower's top, to Clivia and the Dark Anchor. You must face her before she completes her work!"[verification needed]

Once Molag Kena is defeated, Sister Terran will arrive at the top of the tower.

After escaping the top of the tower, she can be spoken with once more.

"I'm sorry you had to face her alone. I read in the Scroll there would have been … consequences for me had I gotten involved in that battle.
Had to time that portal just right!"
What happens now?
"Tomorrow is the first time in many years that I won't have anything to do. No tasks, no duties. Nothing prophesied, anyway.
Have you ever had rotmeth? I've always wanted rotmeth. Maybe a trip to Valenwood is in order."

After the quest, she can be asked some more questions:

"White-Gold Tower belongs to the Empire again, but there's work left to do. Where has the true Clivia gone? I must speak to the Imperial generals. They'll be … interested to know a Daedra has been leading them.
So many questions left to ask."
What do you mean?/What did the Scroll say about Clivia Tharn?

"The Scroll stated the Empress Regent was a shadow of herself, that she would become an enemy to her own people. It didn't say she was a Daedric minion of Molag Bal.
Perhaps it's time for another reading."
I thought you were blind.
"Not entirely. My vision waxes and wanes, as my day of final reading is yet to come.
Let's hope the Scroll's meaning is different now. Or at least clearer."
How can the writing be different?
"The text on every Elder Scroll is fluid, reflecting the changing nature of reality itself. They're like cats.The final section of this particular Scroll beckoned me to action, refusing to change no matter how often I read it."
What did it say?
"It was … blank."

How do you know that wasn't the real Clivia Tharn?

"She has called on my order many times.
The Clivia Tharn of recent days is not the woman I knew. We must find her. Daedric invasion or no, there will be a struggle for the Ruby Throne without an Empress Regent. And that would mean … more blood."
You don't sound overly concerned about her well-being.
"When one has spent a good deal of one's life staring unblinkingly into the cosmic beyond, all but the strongest connections seem … ephemeral."
I see.
"And she yelled at my cat once."