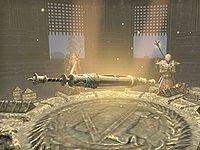 An offensive Elder Scroll in its temple

Elder Scrolls are 'capture-the-flag' objectives in the Alliance War. These Elder Scrolls have been stolen by the three alliances from the Temple of the Ancestor Moths to further the war effort. Each alliance initially controls two scrolls that they store in the Scroll Temples near their Border Keeps. Controlling scrolls improves your alliance's position on the Campaign scoreboard, as well as providing a number of passive bonuses. Each scroll provides either a defensive or offensive bonus to the controlling alliance, but note that you cannot claim enemy Elder Scrolls of a certain type if your alliance does not currently control their own scroll of that type. For example, the Daggerfall Covenant must control their own defensive Elder Scroll of Alma Ruma before they can capture the Elder Scrolls of Chim and Mnem, the defensive scrolls of the other alliances. Captured scrolls can only be stored within an alliance's home keeps, on the scroll pedestal located opposite the Transitus Shrine. The alliance generals offer quests to capture Elder Scrolls. 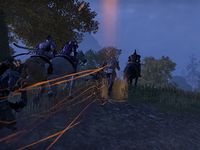 A player running with an offensive Elder Scroll 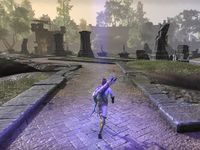 A player running with a defensive Elder Scroll 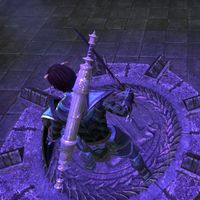 A Elder Scroll on the back of a player

To capture an Elder Scroll from a Scroll Temple, your alliance must first open the Artifact Gate which guards that temple. In order to open the gate, the alliance which controls it must lose control of both the nearest keep to the gate, and the keep in the center of their territory. For example, to open the Covenant-controlled Gate of Alma Ruma, the Ebonheart Pact and/or Aldmeri Dominion must gain control of Fort Rayles and Fort Glademist (the two keeps do not both need to be held by the same alliance).

A captured Elder Scroll must be secured within an enemy keep within two hours from when it was taken from its Scroll Temple. This time limit applies regardless of which alliances hold it during this period. If the two hours expire prior to the Scroll being placed on a pedestal, it will disappear from the battlefield and return to its Scroll Temple.

To recover an Elder Scroll from an enemy keep, your alliance must first assault that keep[verification needed — can you pick up the scroll only when the keep is yours, or must you do so before flipping the last flag?]. Once you have access to the inner keep where the scroll pedestal is located, your alliance must select a player to carry the Elder Scroll. You must then escort that player back to your own territory in Cyrodiil, and restore the Elder Scroll to the Scroll Temple it was taken from. As above, the player who is carrying the Elder Scroll is unable to use the Transitus Network, ride a Mount or enter Stealth.

Scroll pedestals are easily identifiable, as they are emblazoned with the emblem of Julianos, the God of Wisdom and Logic. When holding an Elder Scroll, they are also bathed in an ethereal glow, which is orange for an offensive scroll, or purple for a defensive scroll.

The number of enemy scrolls your alliance has under its control is translated into passive bonuses applied to your character. While in Cyrodiil, the bonuses are taken from the campaign you are currently in. These bonuses do not apply outside of Cyrodiil. Your alliance must control their own scrolls of a certain type in order to benefit from the control of enemy scrolls of that type.

This Elder Scrolls Online-related article is a stub. You can help by expanding it.
Retrieved from "https://en.uesp.net/w/index.php?title=Online:Elder_Scrolls&oldid=2639546"
Category:
Hidden categories: