Coldharbour is Molag Bal's realm of Oblivion. The Prince is attempting to pull Nirn into his realm through the use of Dark Anchors.

Parts of Coldharbour are visited during the main quest. You get access to the main region by finishing The Weight of Three Crowns.

For more information on Coldharbour, see the lore article.

These strongholds are visited during the Main Quest, and are located elsewhere in the realm of Coldharbour. They cannot be accessed directly from the Coldharbour zone.

This stronghold is visited during the Fighters Guild questline.

Fist of Stone Side Quests[edit]

†These skyshards are all located in the northern section of Coldharbour, which cannot normally be accessed until you have done enough quests to unlock the North Gate out of The Hollow City. You can reach them earlier, however, either by traveling to another player in your group/guild/friends list. 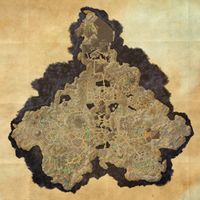 A map of Coldharbour

This Elder Scrolls Online-related article is a stub. You can help by expanding it.
Retrieved from "https://en.uesp.net/w/index.php?title=Online:Coldharbour&oldid=2497446"
Categories:
Hidden categories: