The UESPWiki – Your source for The Elder Scrolls since 1995
< Elder Scrolls Online: Places: Malabal Tor / Subzones
Jump to: navigation, search 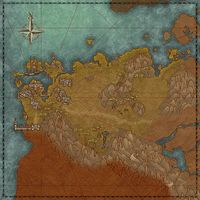 Map of the Broken Coast

The Broken Coast is the western region of Malabal Tor. The port city of Velyn Harbor sits on the west coast, and the tree city of Falinesti can be found here in the Summer. The Broken Coast Dolmen lies on an island off the coast on the eastern edge of the region. It is bordered on the east by the Xylo River Basin.

These side quests count towards the Malabal Tor Adventurer achievement. For Dominion storyline quests which also contribute to this achievement, please see Malabal Tor Quests.