Doomchar Plateau is a large player house located in Malabal Tor. While the house is situated in the Deadlands, the entrance is a portal located in a cave south of Dra'Bul Wayshrine.

This house will be acquired by purchasing the Scorching Pillar, Searing Column, Molten Key, Profane Pedestal, and Unholy Tablet from The Impresario and combining it when you have the Unstable Morpholith pet to turn it into the Doomchar Plateau.

Much like the Coldharbour Surreal Estate, Doomchar Plateau is more of a plot of land with which to build on rather than a house itself. There are two islands linked by a bridge and surrounded by lava. The western island is where the portal back to Tamriel is located with embedded platforms in the ground while the eastern island has a dormant portal structure and foliage dotted around. The vista of the Deadlands has Ash Titans and Watchers flying around, Havocrel patrolling distant battlements, and a Harvester will loop around the islands, intimidating the large Ruinach at the northern tip when she passes. 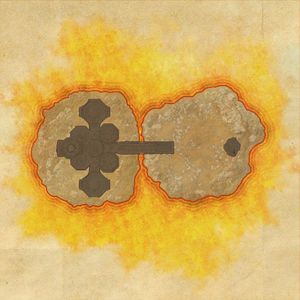