Frostwater Tundra is the southwestern region of Eastmarch. It contains the forts Amol and Mistwatch in the south, and extends as far north as the Bonestrewn Crest. The Frostwater Tundra Dolmen lies in the south, west of Fort Amol. It borders with The Rift to the south, but there is no crossing here. Giant's Run borders on the north and the Icewind Peaks are to the east. 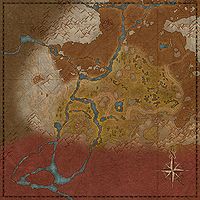 A map of Frostwater Tundra