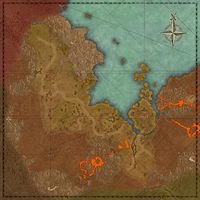 Zabamat is the northwestern coastal region of Stonefalls. The city of Ebonheart occupies the large island on the eastern side of the region. The town of Lukiul Uxith is found in the west, between Fort Virak in the north and Heimlyn Keep in the south. The Zabamat Dolmen is just to the east of Fort Virak. The pass to The Rift is found in the northeast corner. The Varanis region borders to the south and west, while Daen Seeth is to the east.