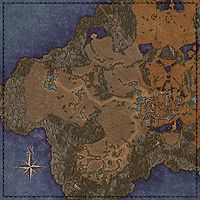 A map of the Shrouded Plain

The Shrouded Plain is the southwestern region of Coldharbour. The Lightless Oubliette lies to the west. The town of Haj Uxith is in the south, and the Spurned Peak is in the north. The Library of Dusk is located on the eastern border, next to the Hollow City. The Fist of Stone borders on the northeast, and the Black Garrison lies to the east.