The Drowned Coast is the western region of Greenshade. It includes the city of Woodhearth, as well as the Seaside Sanctuary to the north and Shademist Moors to the south, with the Drowned Coast Dolmen on an island to the south of that. It also extends in a wedge inland, reaching almost but not quite to the city of Marbruk. It is bordered on the north by Green's Marrow and the south by the Wilderking Court. 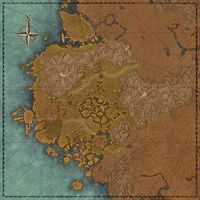 A map of the Drowned Coast
Retrieved from "https://en.uesp.net/w/index.php?title=Online:Drowned_Coast&oldid=2397935"
Categories:
Hidden categories: