Mournoth is the northern region of Bangkorai. It contains the city of Evermore on the west, just over the Stormhaven bridge. The north is dominated by Halcyon Lake and the ruins therein. The Mournoth Dolmen is also found in the lake. The towns of Kerbol's Hollow and Murcien's Hamlet are also found here. It is bordered on the south by the Ephesus region. 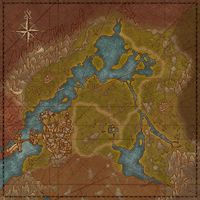 A map of Mournoth
Retrieved from "https://en.uesp.net/w/index.php?title=Online:Mournoth&oldid=2398403"
Categories:
Hidden categories: