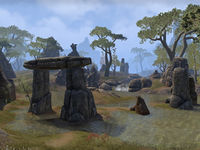 The Viridian Woods are a forest located in northern Bangkorai, east of Evermore. The Silaseli Ruins lie to the north of the woods, and Evermore lies to the west. Forsaken Stronghold is east of the forest, on the other side of the lake. Crows line whatever stone fences they can find. Spriggans and wolves inhabit every nook and cranny of the forest, especially around the Glenmoril Wyrd's encampment. The occasional troll wanders in the untamed sections of the forest, away from the roads. Far to the northeast, where the river flows past Silaseli Ruins, an obelisk is sat upon the side of a waterfall beneath a stone shelf.

The witches of the Glenmoril Wyrd have a camp in the northern section of the woods. Many Wyresses and Glenmoril Guardians inhabit the camp. Two guardians are devouring a stag in the center of the camp. There is one water skin beneath each of the large trees the Wyresses use for shelter. A heavy sack lies beneath the southwestern tent. A cooking fire lies beneath the roots of the northern tree. A single Wyress and her Glenmoril Guardian sit along the side of the road northeast of the camp. There is a lake south of the Wyrd camp dappled with stone arches. Wolves drink from the water. A ruined statue dedicated to the Viridian Sentinel overlooks the lake. A troll's den is located southwest of the lake, away from the road.

Another Wyress camp can be found southwest of the lake in the center of the woods. A water sack lies beneath a tent to the north. A copy of Troll Slaying lies on the ground near a bedroll, beneath the northeastern tent. A dead stag lies upon a stone altar in the southern portion of the camp. A cooking fire sits in the center of the camp. Another cooking fire sits beneath the roots of the western tree, alongside a heavy sack. The containers in both of the Wyress camps are owned. A pair of skeevers loiter west of this tree. A copy of Harvest's End is on a stone slab beneath the roots of the large tree in the northern section of the camp. If you take from them and a Wyress sees you, you will accrue a bounty. A troll's den lies southeast of this camp.

The Viridian Sentinel's hut lies southeast of the central lake. There is a cat on the table within. A copy of Field Guide to Spriggans lies on the nightstand next to the bed. There is a cooking fire in a stone hearth nestled into the wall. A chest can spawn in the back of the hut. Fishing poles and musical instruments lean against the wall near the hut's entrance. Everything in the hut can be taken freely, save for a single radish, which counts as stolen should you decide to pick it up. There is a troll's den east of the hut. Another troll den lies to the northeast of the hut and east of the central lake. 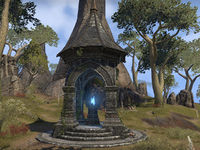 The Viridian Woods wayshrine is located south of the forest, not far from Martyr's Crossing.