Green's Marrow is the northern region of Greenshade. It contains the town of Dread Vullain and the City of Ash I and II, and extends almost as far south as Marbruk. The Green's Marrow Dolmen is just northeast of Marbruk in the southern part of the region. It is bordered on the north by Malabal Tor, and on the south by the Drowned Coast and Wilderking Court regions. 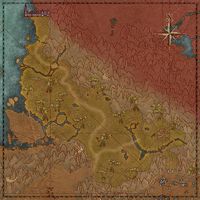 A map of Green's Marrow