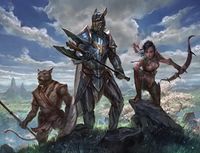 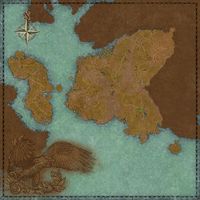 A map of the Aldmeri Dominion's home territory

The Aldmeri Dominion is one of the three joinable factions participating in the Alliance War, the other two being the Daggerfall Covenant and the Ebonheart Pact. The crest of the Aldmeri Dominion is an eagle, and its colors are yellow and silver. It consists of the Altmer of Summerset Isles, the Bosmer of Valenwood, and the Khajiit of Elsweyr. The alliance is a nascent empire that rules its holdings with an iron fist. Led by Queen Ayrenn with Elden Root as its capital, the Dominion seeks to reestablish Elven dominance over Tamriel in order to protect it from the carelessness of the younger races. The province of Valenwood, led by King Camoran Aeradan, joined the alliance to help fight off the Colovian troops that were capturing territory in northern Valenwood, while Elsweyr still remains in the grip of the Knahaten Flu. Dominion players will begin on Khenarthi's Roost after being washed up unconscious on the shores of the island following their escape from Molag Bal's realm of Coldharbour.

The Dominion also have a territorial claim over the southern and southwestern parts of the Imperial heartlands.

"Today we make our stand. Today we take back the Ruby Throne, which is ours by ancient right and the blessings of the Divines. Stand with us." —Queen Ayrenn

This Elder Scrolls Online-related article is a stub. You can help by expanding it.
Retrieved from "https://en.uesp.net/w/index.php?title=Online:Aldmeri_Dominion&oldid=2469437"
Category:
Hidden categories: