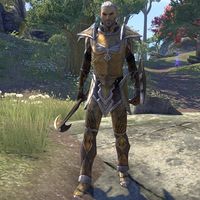 Battlereeve Urcelmo is a commanding officer of the First Auridon Marines, Queen Ayrenn's royal guard. He is also a logistics expert and several of his reports can be found throughout the Aldmeri Dominion. He is Queen Ayrenn's escort and most trusted adviser.

He is responsible for investigating the Temple of Auri-El in Vulkhel Guard during the quest A Hostile Situation.

During the quest The Moonlit Path, which shows a possible future scenario where the Aldmeri Dominion loses its hold on the Khajiit and the Bosmer, Battlereeve Urcelmo turns on the queen, as he was the last person she could trust. The Veiled Heritance corrupted him, and he mortally wounds her. Once Ayrenn learns of this vision, it gives her an opportunity to make plenty of jokes at his expense which causes Urcelmo a great distress.

His person has become one of the most common in the sexual fantasies of many of the Aldmeri Dominion subjects, especially when paired with Queen Ayrenn.

The Battlereeve can be found on the Temple Grounds accompanying the Queen. After you have found your way there, you can report to him about the plot as per Razum-dar's request.

"Explain yourself. What are you doing here?"
Keep your voice down, battlereeve. Razum-dar sent me.
"Razum-dar. Yes, I know the name. You haven't answered my question, though."
There's a plot to kill the Queen, battlereeve.
"Hmm. We've taken every precaution. The whole area is locked down. Watch Captain Astanya assured me."
The captain is the one behind this. She plans to attack the Queen in the temple.
"The guard captain? Absurd!" 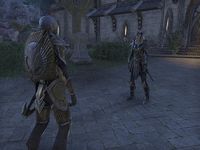 The Queen speaks to her Battlereeve

At this point, Queen Ayrenn will intercede:

You can then follow him into temple, where the two of you find Steward Eminwe lying wounded on the floor:

Battlereeve Urcelmo: "Mara be merciful. What's happened here?"
Steward Eminwe: "You. I'm sorry. I was wrong. I tried to stop them .… Watch out. On the balcony. It's Astanya!"
Steward Eminwe: It's a trap!"

A flaming arrow strikes Eminwe, killing her, upon which Astanya will reveal herself above: 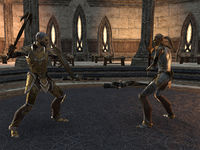 The first wave of Heritance Cutthroats will appear. Once they are defeated:

Defeat the next wave of assassins.

Watch Captain Astanya: "The Dominion won't last. The Veiled Heritance will see to that!"
Battlereeve Urcelmo: "The Dominion will last long after your corpse cools! Now come down here and face your death!"

Once the third wave is defeated, Astanya will jump down to fight you both:

Watch Captain Astanya: "Incompetents! I'll have to take care of you myself."

"We need to report back to the Queen. Let's get out of here!"

Outside the temple, he can be found standing to the side.

In the Name of the Queen[edit]

Arriving to Tanzelwil, you will witness the Queen praying to the ancestors, accompanied by Urcelmo.

Queen Ayrenn: "We call upon our honored ancestors to pass on their memory and wisdom.
Ancestral Spirit: "Your ancestors disavow you, false one. The Veiled Queen is the rightful heir, and Norion shall end your reign."
Battlereeve Urcelmo: "My queen, look out!"

If you speak to him, he'll say:

"The Queen's safety is my primary concern. Everything else is just bookkeeping."

You'll need to defend the priestesses at the holy site, to which he'll comment:

"This isn't over yet. Remain vigilant, my friend."

The Queen will ask you to visit the catacombs with her, but he would rather not be left out:

Queen Ayren:n "I can handle myself. I was a warrior long before I became a Queen!"
Battlereeve Urcelmo: "Your Majesty! Let me come with you!"

He will agree to stay outside, but he warns you:

"Her Majesty can handle herself, but she can also be reckless. Don't leave her side!"

Talk to him after finishing the Tanzelwil objective.

"One day, over a drink, you must tell me what happened down there. For now, the Queen's safety is my primary concern."
What now, Battlereeve?
"Razum-dar has been investigating threads in the Veiled Heritance plot. We think he's caught a break in Mathiisen, and he could use some help. Head up there and lend him a hand, will you?"
Yes, sir.

This starts the quest.

If you speak to him in front of the Mages Guild before the quest begins:

"Stars above. Glad to see a friendly face. You're one of Raz's agents, aren't you?"

The Marines will direct you to find him by the Mages Guild in Daedra-infested Firsthold.

"Stars above! You've no idea how relieved I am to see you.
I hope you're resolved. We've got a hard road ahead of us."
Just tell me what to do, Urcelmo.
"Estre has sealed the castle within a powerful barrier. It's powered by wards and guarded by Dremora.
Destroy the wards and we drop the barrier."
How do we lower the wards?

"One of the Guild mages, Sinien, has a plan. We retook the hall here to gain access to a source of magical power.
Head inside. She'll tell you what to do."
Good luck. Battlereeve.
"Trinimac guide your hand. And may he protect us all."

Can you hold this position?

"We'll be fine. We've held them off this long. We can hold a bit longer. You just focus on what Sinien has to tell you."
Who are these defenders? They're not Marines.
"Firsthold must not fall. We've unsheathed our sharpest blades. Curious about these folk?"
Who are all these folk? The Wood Elves and Khajiit in leathers?
"Razum-dar's folk. Eyes of the Queen. I know you've worked with him before. Normally they'd never expose themselves like this.
The cat said: "We do not draw blades in the daylight." But here they are, making sure we live through this."
Who are those mages?
"Sinien's spellslingers. Mages from the guild hall. Normally they'd be curled up with a good book or brewing some obscure potion.
They've done the guild proud, backing us up."
The soldiers in heavy armor. Who are they?
"My personal elite guard. We call them Talons. The queen has her Eyes. I have my Talons.
Between the Talons and the Marines, the finest blades in Auridon are arrayed against Oblivion."

If you completed the North Beacon objective, his answer will be slightly different:

"I received word just before the blade came down. You fought beside my Talons at North Beacon. I'm damned proud of these folk. Between the Talons and the Marines, the finest soldiers in Auridon are arrayed against Oblivion."

After disrupting Estre's wards, you may enter Fisthold Castle with Raz, Sinien and Urcelmo are waiting inside. As you enter the castle, Urcelmo will acknowledge your presence.

Urcelmo: "Good, you're both here. We're going after Estre."

Enter the Deadlands and confront Estre.

Urcelmo: "Let's end this."
Estre: "What do we have here? A lamb sent to slaughter? You dare to challenge the power of Mehrunes Dagon?"

During the battle, Urcelmo will call out to her.

Should you talk to Urcelmo after coming back to Tamriel, he'll say:

"Ah, at last. Queen Ayrenn is eager to speak with you."

If the Queen has already rewarded you, he'll say:

"May Trinimac guide your hand and our blades be raised in battle again."

The battlereeve will be among the party waiting outside Hectahame with Queen Ayrenn:

"If you're the one Indaenir was referring to, speak with Queen Ayrenn.
But no sudden moves."

Speak to the Queen, and he'll say:

"The Eight watch over you. We lost a lot of good soldiers to the corruption. I pray Indaenir is right about you."

After you've killed Naemon, he says:

"I see you were successful."

Once Queen Ayrenn announces Indaenir as the new Silvenar, he says:

"It's good that Naemon's finally put to rest. Terrible what the Veiled Heritance did to him."

After completing the quest, he'll say:

"Velyn Harbor is rumored to be overrun. I wish you luck. We'll be preparing for Malabal Tor ourselves."

Upon entering the temple he will greet.

"Hallowed. I hope you and these Champions won't take long. I worry about Her Majesty's security this far from Auridon."

Once you've spoken to Kauzanabi-jo, he will say:

"Good luck in there."

After the trials, he will say:

"Well done, Hallowed. I know the Queen values your contributions to the Dominion."

Speaking to him during the quest:

When you arrive at the Temple of the Dance, you'll find him and others outside the entrance:

"Hmph. You've impressed even me. The Dominion owes you yet another debt."

In Ayrenn's Last Stand, you'll need to defeat Urcelmo to save Queen Ayrenn.

After returning from the plane of Lorkhaj, he'll comment:

"I … Hallowed, you must know. I would never turn on the Queen that way. These visions Hunal speaks of, they … they could never come to pass in the light of day."

"I am glad you came through in one piece, Hallowed. Um … perhaps you can help vouch for me to the Queen? She continues to make jokes about treachery. I do not like it."

This Elder Scrolls Online-related article is a stub. You can help by expanding it.
Retrieved from "https://en.uesp.net/w/index.php?title=Online:Battlereeve_Urcelmo&oldid=2360582"
Categories:
Hidden categories: