The UESPWiki – Your source for The Elder Scrolls since 1995
< Elder Scrolls Online: Quests: Coldharbour / Main Quest
Jump to: navigation, search

I convinced the leaders of the three alliances to meet to discuss a plan to attack Molag Bal's realm of Coldharbour. The meeting takes place on the historic island of Stirk. Hopefully, the meeting will go smoothly.

After completing Messages Across Tamriel, Vanus Galerion will be inside the Vulkhel Guard Fighters Guild, the Mournhold Fighters Guild or the Wayrest Fighters Guild, depending on your alliance. He tells you that everything is ready for the summit. Once you inform him you are ready, he opens the portal to Stirk.

You, Galerion and Countess Hakruba of the Fighters Guild, arrive at the northwest edge of the ruins where representatives from each of the alliances have gathered. Galerion has assembled a team of Coldharbour experts and asks you to meet them on the way to the summit.

The summit takes place in the ruin's center, southeast of where you arrived on Stirk. Galerion will greet each expert as you make your way up the path. The experts include Lady Laurent, Telenger the Artificer and Captain Alphaury. 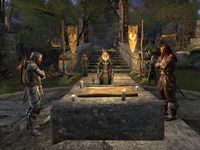 Once you climb the stairs to the meeting point, High King Emeric will approach the table from the left, where the Daggerfall Covenant camp is. Then, Queen Ayrenn exits from her portal across from you. Finally, Jorunn Skald-King appears between the Ebonheart Pact banners on the right.

Ayrenn speaks first, asking the other rulers to put aside their differences. However, King Emeric questions the meeting and asks if it is a ruse, a plan to divert Daggerfall and Ebonheart forces while the Dominion takes the Imperial City. Jorunn back, insinuating that backstabbing is Emeric's favorite tactic. Ayrenn responds to both by replying that Molag Bal is more powerful than either of the other two alliances. Emeric refuses to help, insulting the other two leaders in the process, and the meeting devolves into a shouting match.

Vanus interrupts their arguing, and the rulers retreat to their camps to cool down. You suggest to Galerion and Hakruba that the guilds lead the attack on Coldharbour instead. Galerion suggests you visit each leader individually to propose the idea, while Hakruba reminds you of the non-interference pact that binds the guilds. In order to fight Molag Bal's forces across Tamriel, each leader must accept the guilds' presence in his or her realm. All three alliance leaders must consent to the new plan.

You must approach the three leaders and convince them that sending the Fighters and Mages Guilds into Coldharbour is the best course of action. The leader of your own alliance will be swayed without effort, but the other two need a little more convincing. Prompts to Persuade Emeric and Intimidate Jorunn will appear if you're not part of their alliance. Queen Ayrenn can be Intimidated by members of the Ebonheart Pact and Persuaded by members of the Covenant. Ultimately, it doesn't matter what you say to the alliance leaders to attempt to convince them that the guilds are fit to invade Coldharbour in the alliances' stead. 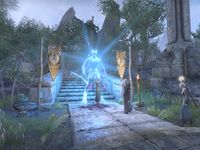 Molag Bal speaks to the leaders

You tell Galerion, who has now moved to the table, of the agreement. However, he senses something is wrong; the air suddenly feels heavier, as if a storm is approaching.

Caldien, who has been announcing each of the rulers, suddenly drops to one knee and says, "He has arrived." He pleads for Galerion to get away from him and run, then is struck by lightning, and Molag Bal appears behind him. Molag Bal plans to crush all three of the alliances because their leaders are all in one place. He announces his plan to rule all of Nirn and disappears, killing Caldien.

The island is under attack. Galerion will prevent more rifts from opening, while Countess Hakruba protects the leaders and you close the unstable rifts. In the Ebonheart Pact area, the Skald-King is under attack from a titan called Sormorask. Ra'Lorka, a harvester, is attacking Queen Ayrenn in the Aldmeri Dominion's area, and Bitterwind, a storm atronach, fights King Emeric.

You return to Galerion who fears there is no time to waste. He and Hakruba confront the leaders in a speech asking them to trust in the guilds and sanction their actions. Emeric and Jorunn agree, and Ayrenn remarks that much of their distrust was sown by Molag Bal.

Galerion announces that the time has come, and you follow him into the Portal Valley. You enter the portal and are greeted by Cadwell, who gives you some gold.