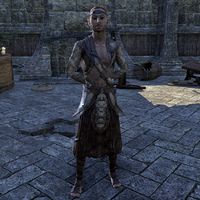 Spinner Maruin is a Wood Elf spinner who initially occupies the Spinner's Cottage. After Throne of the Wilderking, he relocates to Greenheart.

After the Wilderking sends you to find Maruin at the Spinner's Cottage, he'll greet you simply:

"I was beginning to think you wouldn't make it. I've already begun Aranias' story."
The Wilderking told me to find you.
"Yes. Of course. I have been waiting for you for some time. The story needs you to play a part in the present ... and in the past."

Following on from the Spinner's Tale, Spinner Maruin will send you to rewrite Aranias's story:

"You certainly took your time about things. Not your fault, I understand, not your fault. We may yet get this right!"
What are you talking about? Where is Aranias?
"Inside the story.
You must also enter the story in order to help her."
All right, I will.
"Aranias wants to see the Wilderking. I'm his gatekeeper. To see him, you ask me nicely and then I tell you a story. A story that you take part in."
So she's inside the story you're telling?
"Yes. The story is one from her own past, but she's convinced that she's living through these events for the first time.
You'll play the part of the close friend she never had. Someone she can trust, who can change the person Aranias becomes."
All right, then put me into the story.
"Ask nicely."
May I please join Aranias in the story?
"Of course! Now, sit down by the fireplace. Imagine there's a nice, warm fire burning there, and I'll set the scene."

Maruin will then walk to the fire. Follow him and speak to him:

"Have a seat by the fire and let me know when you're ready to hear the story. Remember, ask nicely."
<Look into the fire>
"Imagine the flames are the waves of a vast ocean."
<Watch the flames>
"Cold waves on a clear blue ocean off the coast of Summerset."
<Focus on the fire.>
"Now picture an island. Trees around the island shimmer in the sunlight; each gently cresting ocean wave sparkles.
Many stones, roots, and flowers on the island were shaped by magicka. Only two living Altmer possess such power."
<Continue to focus on the fire.>
"One of those two Altmer stands outside the manor on this island. Her island.
Go to her. Become her friend."
<Enter the story.>

As you exit the house you'll hear:

Spinner Maruin will interject in the story a few times, the first time after you and Aranias fight off some bandits: "Come! I must speak with you once more." Find his ghostly form outside the barn, and speak to him:

"In her tale, Aranias was volatile and she swung between anger, shame, and hope. Feared by her own parents because of her abilities, she faced the bandits alone.
This made her bitter and hardened against others. Vulnerable to outside influences."
What happened?
"You will soon see it for yourself.
But first, you should view another scene from Aranias' past. She was a bit younger, and excited about her newly-found skills. Are you ready?
I'm ready.

She doesn't remember anything about Bramblebreach.

"Of course not. For her, it hasn't happened yet. Remember, I put you into her past to help her when she's at her most vulnerable. She lashed out at you just now because she can't fight against her parents.
She trusts you. That's what's important."
I'm ready to see more of her past.

After you witness Aranias's parents arguing with her, Spinner Maruin's ghostly form will approach you:

"Gifted with a rare and powerful ability, Aranias tried in vain to win her parents' affection."
What happened next?
"So much 'happened next,' but I especially draw your attention to two particular events.
one scene is atop the lighthouse. The other, in the manor's great hall. They will help you understand more about our troubled Altmer, I hope."
Is that all I need to do? Understand her?
"No. The greatest challenge comes next, and Aranias needs you. Her parents returned after the attack on the farm, and brought with them the people they considered their daughter's only hope. The Veiled Heritance.
She should not face this alone."
Where is she?
"Getting changed at the manor. You should do the same after you watch those scenes.
You'll find a change of clothes in the guest bedroom off the great hall. Then, go to Aranias in the garden."

Speak to him before leaving and he'll say:

"Aranias must not meet the Veiled Heritance alone, if we're to help her.
Go to the lighthouse, and thereafter to the manor to watch her past. By then, she'll be waiting for you in the garden."

In the tale, you'll kill Andur, and Maruin will again approach you:

"Hm. You killed Andur? That's not supposed to happen."
What do you mean?
"Oh, don't worry, it was an entertaining twist, to be sure. But sadly, as real as it may seem, this is just a story.
In real life, you were not there to kill Andur."
Is he more dangerous in real life?
"He has had a considerable time to grow in power. And his temper has not gotten any longer, if you understand me.
It seems the Veiled Heritance have sent him after Aranias, to ensure she kills the Wilderking, or dies if she fails."
How do you know that?
"I met him. He wanted to get into this story, but he wouldn't ask nicely.
But there's nothing we can do about that right now. We have a story to finish. Aranias' big moment is about to arrive. You should go to her."
Where is Aranias?
"In the garden. She's been commanded to kill the wife of this Bosmer. You should hurry to her. She faced this alone last time."

If you speak to him before leaving, he'll add:

"You should watch Aranias' demonstration."
What happened in real life when Aranias demonstrated her powers?
"She was alone and frightened. Her conscience told her one thing and her fear told her another. In the end, she joined the Veiled Heritance."
Do you really think my presence here will make a difference?
"Aranias needs to see that another path was possible then, and that another path is possible now.
You can give her the courage to do the right thing."

When the story ends, and you return to Spinner's Cottage, talk to Maruin outside the cottage:

"You were a fine character. most enjoyable. And it looks like you made quite an impression on Aranias."
What just happened? Where did she go?
"As one story ends, another reaches its climax. Our little bit of mischief was a success: because of you, Aranias may very well betray her masters to defend the Wilderking.

After you complete The Witch of Silatar, the spinner will continue:

"Truly, I hope we never need change a story so extensively again. Though we spinners can do so, it's usually better to let a tale conclude on its own.
Usually."
What is it that I have to do?
"Venturing into the story of Aranias' past has sown the seeds of her transformation, but they have yet to sprout.
Even now, she and Andur blaze a trail of destruction toward the Wilderking's throne. Their intention is to destroy him."
How can I protect him?
"Preserving his life may be impossible at this point, but you must try. Without him, the Valenwood will rage out of control.
The only hope lies with Aranias, and with you. Go to Greenheart and follow the trail of fire to the Wilderking's throne."
I will try to catch up with Aranias and Andur.

After the conclusion of this quest, he drops "Spinner" from his name, becoming simply Maruin, and relocates to the path just north of Greenheart. Once he relocates, he'll have a final story to tell:

"Unfortunately, no. This Veiled Heritance seems set upon attacking the heart and soul of our people, and that is the Valenwood.
I sense that even darker threats are emerging elsewhere. I hope you or someone like you is there to stand in our defense."

"Over time, yes. The myriad of sensations and experiences from being connected with the Valenwood will crowd out the small memories from her past.
The legacy of her character will remain, though, and will shape the future of the Valenwood."

If spoken to after these quests, he will say:

"Truly, I hope we never need to change a story so extensively again. Though we spinners can do so, it's usually better to let a tale conclude on its own.
Usually."