I saved Dune from the plots of Javad Tharn. Now I must aid the Lunar Champion as she walks the Two Moons Path, a mystical Khajiit ritual used to anoint a new Mane.

When you are ready to walk the path talk to Shazah/Khali. 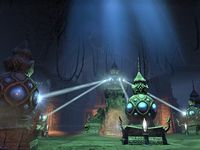 Inside the Temple of the Dance, you talk to Rid-Thar-ri'Datta. He says you need to align the reflectors to the light of Jone and Jode. As you align each of the four crystals, you see a vision of the former Manes and Khali and Shazah becoming the Lunar Champions. Once all four are aligned, a portal will open. 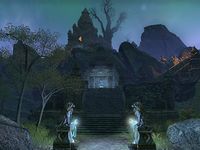 The portal takes you to the Demi-Plane of Jode. Talk to Shazah/Khali. She says the Path will show you the way. A ghostly Bosmer named Elilor appears and runs to another portal. 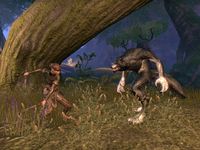 What the future may hold

In the next area, Elilor is lying on the ground, injured. The Hunt has driven all the Bosmer mad. He tried to protect the Silvenar and the Green Lady. They are being pursued by the Wild Hunt. You defend them until the Silvenar is too tired.

Talking to the Green Lady reveals that the Khajiit left the Aldmeri Dominion after the fall of Akkhuz-ri and the death of Gharesh-ri. The Bosmer used the Wild Hunt to stand against the other alliances, which closed in on the weakened Dominion. It consumed the people of Valenwood, forcing the Green Lady and the Silvenar to go on the run.

The Silvenar awakes, but something is wrong. He transforms into a werewolf. You and the Green Lady are forced to kill him. She blames Queen Ayrenn.

You talk to Shazah/Khali again, then follow a ghostly Cariel into the next portal. You arrive to see Cariel wounded by a Veiled Heritance soldier. The Veiled Heritance led a revolt against Queen Ayrenn. All of the Summerset Isles turned against her. She sends you to help Razum-dar, the Queen's last defense. Battlereeve Urcelmo attacks Razum-dar. The Battlereeve turned against the Queen when she tried to hold the Dominion together. The other alliances are marching on Summerset.

You open the door to Ayrenn's Last Stand. Inside the inner sanctum, Ayrenn and Urcelmo fight. After he is defeated the Queen leads you back out to the Summerset Isles. She commands you to leave her alone to die, and you exit through the portal door.

Shazah/Khali is convinced this will not be the future of the Dominion.

This Elder Scrolls Online-related article is a stub. You can help by expanding it.
Retrieved from "https://en.uesp.net/w/index.php?title=Online:The_Moonlit_Path&oldid=2371886"
Categories:
Hidden categories: