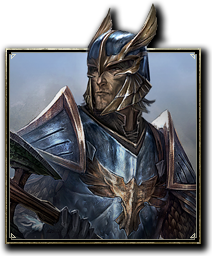 The High Elves, or Altmer, arrived in Tamriel thousands of years ago from Old Aldmeris. They see themselves, perhaps justifiably, as the ruling race of Tamriel. They are a highly cultured people, known for their breathtaking architecture and massive libraries of histories and creative works. They tend to be isolationists, largely remaining on Summerset Isle, and only emerge when they perceive a great threat to their homeland. They are powerful mages and warriors, and the de facto leaders of the Aldmeri Dominion.

A list of all the Altmer encountered in ESO can be found here.

The racial skills of the High Elves reflect their magical affinity by increasing their spell damage, resource recovery, base magicka, and experience gain. These innate bonuses help define the race as proud and powerful spell casters.

Altmer have an associated skill line that complements their lore-based abilities with a focus on improved magicka pool and regeneration and their destructive magic abilities. Abilities are listed below. Notes