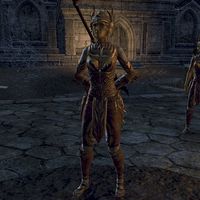 Golden Saints, also called the Aureal, are a haughty, golden-skinned race of Daedra in service to Sheogorath. Like most NPC enemy types, there are many different classes of Saints and they are often found in complementary groups. A Golden Saint Costume can be unlocked by acquiring 20 Champion points. For more information, please see the Lore article. 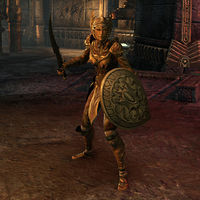 Aurorans are a golden-clad race of Daedra in service to Meridia. Originally only one appeared in the game, and it is technically a renamed Golden Saint. A distinct Auroran enemy type was later added to the game with Update 21 and is documented on the main article.