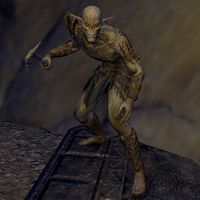 The Falmer (or Snow Elves, and called "snow ghosts","bogles," "riekr-kin," or "clatter-coats" by ill-informed Nords) are a blind, pale-skinned subterranean race of elves. Once the rulers of Mereth (modern-day Skyrim), the Snow Elves were slaughtered by the Nords and enslaved and blinded by the Dwemer. Centuries of living underground has resulted in their goblin-like appearance, and their continued existence is believed by most surface dwellers to be nothing but myth. They wear Chitinous arms and armor.

Most Falmer are encountered in Blackreach along with their tamed chaurus companions.

A list of all Falmer encountered in ESO can be found here.