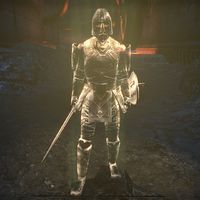 A Dwemer spectre wearing a full set of armor

Dwemer (called Dwarves by men) are an extinct race of elves known for their technologically advanced society. Dwarven society began in Morrowind and spread to Skyrim, Hammerfell, and beyond. They disappeared suddenly in 1E 700, leaving behind Dwemer ruins inhabited by their still-functioning automatons. Sotha Sil also took inspiration from the Dwemer when making his Clockwork City.