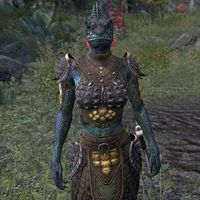 A Naga from the Naga-Kur Tribe

The Nagas are a little-known breed of Argonian that live in the deep parts of Black Marsh. Nagas have some distinct differences in their appearance compared to the Argonians most commonly seen throughout Tamriel. They are described as having "huge mouths filled with dripping needle-like fangs". Nagas are anywhere between seven and eight foot tall, though the people of the Naga-Kur tribe seem to be the same height as the common variety of Argonian, and are called 'puff adders', suggesting snake-like features.

When Imperial interests were attempting to maintain plantations in Argonia, the Nagas generally acted as highway robbers; however, following the cessation of these efforts, they have since left the roads and have gone back into the inner swamps.

The Naga-Kur (or "Dead-Water Tribe") of northern Murkmire control much of the inner swamps. Unlike the tribeless Nagas that inhabit the region, the Naga-Kur are proud warriors, deeply entrenched in tradition. They are hostile to outsiders and feared by neighbouring tribes because of their brutal ways.

A list of all the Naga encountered in ESO can be found here.