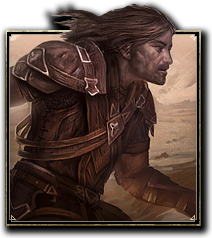 Bretons are a race of humans that hail from High Rock. The men and women of High Rock were once ruled by High Elf overlords. Some Elven blood still runs in their veins, giving Bretons an innate grasp of magic that distinguishes them from the other human races. Passionate and flamboyant, intelligent and resourceful, the Bretons are renowned and talented craftsmen, shrewd merchants, gallant cavaliers, and inventive wizards. They can also be proud and quarrelsome. Tales of warfare between the kingdoms of High Rock account for much of their history, but most revere the Eight Divines and value prosperity over glory.

A list of all the Bretons encountered in ESO can be found here.

The racial skills of the Bretons reflect their affinity for the arcane, increasing their base magicka, magicka recovery, light armor, alliance point gain, spell resistance, and cost reduction of spells, allowing them to cast spells with little pause.

Bretons have an associated skill line that complements their lore-based abilities with a focus on an improved magicka pool, spell resistance and their defensive abilities. Abilities are listed below. Notes