Illustration of a typical Breton male

Bretons are the human descendants of the Aldmeri-Nedic Manmer of the Merethic Era and are now the inhabitants of the province of High Rock.[1] They are united in culture and language, even though they are divided politically, for High Rock is a fractious region.[1] Bretons make up the peasantry, soldiery, and magical elite of the feudal kingdoms that compete for power.[2] Many are capable mages with innate resistance to magicka.[3] They are known for a proficiency in abstract thinking and unique customs.[4][5] Bretons appear, by and large, much like other pale-skinned humans. They are usually slight of build and not as muscular as Nords or Redguards.[6] The great diversity in their appearance is to be expected from their politically fractured society, though their clothes, accents, customs and names are fairly uniform.[1][2]

There is evidence of human settlements in High Rock dating back at least a thousand years before recorded history.[7] Before or soon after the start of the First Era, Aldmer came to High Rock from the Summerset Isles and interbred with Nedes, eventually creating the Breton race.[8][9] Sometimes there was conflict, but also long periods of coexistence in a multiracial society.[10] While the Aldmer maintained control of Tamriel, the Manmer lived as lower-class citizens, supporting their elven brethren. Notably, this subservience and general harmony meant they were spared during the Night of Tears.[1] The Skyrim Conquests brought much of High Rock under the control of the Nords around 1E 246, though they would lose control around 1E 369 as a result of Skyrim's War of Succession.[7] They apparently never controlled Wayrest, which likely wasn't founded until several hundred years later.[11] Around the same time, the Alessian Order would make campaigns against the Direnni, weakening them enough for the Bretons to rebel against them.[1][9][12] Most of High Rock would be free from elven control by 1E 498, though they would remain in the province for most of the First Era.[8] Other historical enemies of Bretons, besides each other, include Orcs and various supernatural creatures that roam High Rock.[9]

Over time, the emerging Bretons absorbed the remaining Nordic population in High Rock, and the land would be definitively Breton by the end of the First Era.[8] Tiber Septim's Empire would later easily conquer the squabbling kingdoms that emerged during the Interregnum, but would find it impossible to truly squash the sectarian conflicts between them that hampered trade and prosperity.[1][8] Since most Emperors in the Third Era were Bretons, or had spent their youth in High Rock, Bretons were generally supportive of Imperial rule, but were often disgruntled by its inefficacy at protecting them from violent conflicts.[13] However, the decentralized nature of Breton society has also given it surprising resilience during times of upheaval or chaos.[8] One of the best examples of this was illustrated during the defeat of the Camoran Usurper, when four of the smaller Breton city-states - Dwynnen, Kambria, Phrygias, and Ykalon - led a united force of Bretons that managed to halt the Usurper's inexorable northward advance and finally defeated him in the Battle of Firewaves.[13] It wasn't until the Warp in the West that the problem would at least be reduced: the roughly two dozen city-states comprising southwestern High Rock (where the majority of the population is located), were united into two kingdoms: Daggerfall and Wayrest, with Orsinium taking control of part of the Wrothgarian Mountains in central High Rock.[14][15]

The word most often used to describe Breton villages is "quaint," while Breton cities are described as having an austere grandeur.[8][16] According to Imperial sources, function is valued over form, resulting in earthen, hand-crafted dwellings free from ornament.[17] In reality, Breton architecture often features patternwork, sometimes exceptionally ornate; basic patterns include common Breton motifs such as the trefoil and basic knotwork, while more ornate examples on buildings such as castles, cathedrals, and guild buildings feature detailed friezes, bas reliefs, and intricate stained glass windows.[18] Breton architecture features heavy use of the pointed arch, evident in their walls, doors, windows, and towers. Most people in High Rock live in small cottages in the countryside or townhouses in the cities; only the nobility and their servants live in large castles. Despite efforts under Tiber Septim to demilitarize the province by demolishing defensive structures, many villages are still surrounded by high walls, and fortresses dot the landscape.[1][16] 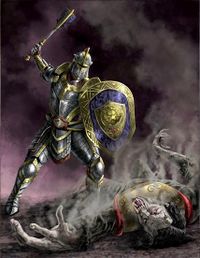 The Bretons' largely agrarian and hierarchical society is feudal in nature. Most Breton cities are sprawling trade hubs, with Breton society consisting of the peasantry, the middle class, the magical elite, and the nobility.[1] The jockeying for power among the various monarchs and powers of the Iliac Bay region is a deeply ingrained, even cherished, part of Breton culture.[1] Though they have several paths to prosperity, becoming a nobleman by performing quests and services to curry favor with various rulers is considered the best way, which has created a cultural "quest obsession" among young Bretons.[1][19] The desire to find some great opportunity for fortune and glory has made Bretons venture all over Tamriel, even to such remote locations as Thirsk on the island of Solstheim, where one adventurous Breton once earned the position of chieftain.[20][21][22] Many use their magical talents to earn success.[1] They're often considered a friendly and humorous people, though there is little love lost between many Bretons and Redguards following the vicious War of Betony.[11][23][24]

Bretons are said to enjoy intellectual pursuits; they often have an affinity for anything related to logic and ordered complexity.[5] Their love of knowledge and affinity for commerce drives them into a host of careers, including trading, the military, sailing, medicine, textiles, manufacturing, writing, theology, philosophy, banking, all kinds of artistry, and other scholarly pursuits.[11][25][26][27][28] Espionage has also proven to be one of their strong suits; Breton double agents, assassins, and spies have turned the tide of wars throughout recorded history.[29][30][31][32][33]

Bretons are not disposed to "excessive religion",[7] but most accepted the Aldmeri pantheon of gods while under elven rule, then made the transition to the Divines. The most notable spirits traditionally worshipped by Bretons are Akatosh, Magnus, Jephre, Dibella, Arkay, Zenithar, Mara, Stendarr, Kynareth, Julianos, and Phynaster.[34] They also recognize Sheor, the Bad Man, believed to have been introduced by the elves during their conflicts with the Nords as a demonized version of Shor.[34]

People of the northern regions of High Rock cremate their dead, while burial remains common in the south.[35]

The Reachmen of eastern High Rock and western Skyrim are thought to be partially descended from the Bretons, but diverge severely in their culture and traditions. Living in close proximity with Orcish tribes, they adopted some of their customs and wild magic, mixed with ancient Aldmeri and more recent Nordic influences.[1] Some Reachmen have settled in towns such as Markarth and integrated into modern society, but many still violently resist any outside occupiers of their tribal lands, calling themselves the Forsworn.[36]