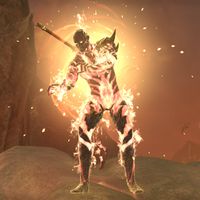 Fire Behemoths are giant humanoid Flame Atronachs encountered in Black Drake Villa and The Deadlands. Unlike normal Flame Atronachs, they resemble Havocrels and can use weapons.

They have been summoned by the True-Sworn to help burn down the villa. Skilled fire mages such as Pyroturge Encratis and his True-Sworn disciples can summon Fire Behemoths to do their bidding.

Fire Behemoths can also be encountered in Blackwood, such as through the Oblivion Portals or summoned within Rockgrove.