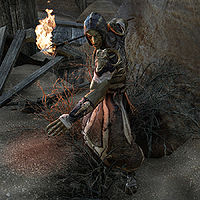 Goblins are short, humanoid enemies. They live in tribes in their own small settlements—usually in or near caves and mines—and will attack any trespassers. In general, they are hostile, and have been known to attack settlements.

A Goblin polymorph is available via the Shadowsilk Gem disguise and Shadowsilk Goblin Polymorph.

This Elder Scrolls Online-related article is a stub. You can help by expanding it.
Retrieved from "https://en.uesp.net/w/index.php?title=Online:Goblin&oldid=2647804"
Category:
Hidden categories: