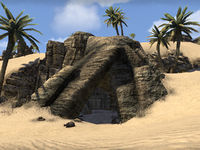 Divad's Chagrin Mine is a mine in central Alik'r Desert, southeast of Sentinel containing goblins. It is inhabited by Sandgrubber goblins. Sorhab and his goat are located near the wayshrine. The Lost Caravan lies south of the mine, and Tu'whacca's Throne is to the north.

Several dead Dunmer are located in the tunnel near the entrance. A note on top of a stack of crates explains that the goblins in the mine were laborers in the mine, and that no one wanted to buy them. The mine's overseers had gone missing. The Dunmer corpses presumably belong to the people who owned the goblins. A chest can spawn near this stack of crates.

The western chamber contains a camp with cots located beneath tarps. There is a dining table further south, and Dunmer corpses are everywhere. Some of them are laying on cots, and may have been killed as they slept. A shield is propped up by a greatsword over a circle of bones, which lies beneath a small tree to the south. Armin is located here

The delve boss is located in the southern part of the eastern chamber, beside a bonfire. A chest can spawn north of the bonfire. There are many ogres in this room. A chest can spawn beneath two stone slabs leaning against each other to form a shelter above a bed of furs.

Explore and clear Divad's Chagrin Mine. 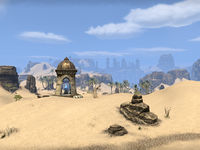 Divad's Chagrin Mine Wayshrine is located south of the mine, near the main road to Bergama. 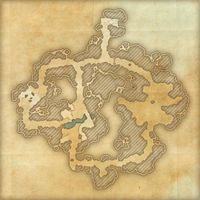 A map of Divad's Chagrin Mine