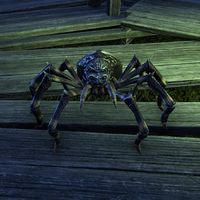 Spiders range from small, passive creatures to large, aggressive ones. They vary somewhat in appearance: from brown, black, grey, and blue spiders to spiders with red markings. They can be found in a variety of places, such as in their webs, in caves, or in the forest. The small passive ones yield Crawlers when slain. Both types may yield the Spider Eggs alchemy reagent.

This Elder Scrolls Online-related article is a stub. You can help by expanding it.
Retrieved from "https://en.uesp.net/w/index.php?title=Online:Spider&oldid=2546764"
Categories:
Hidden categories: