The UESPWiki – Your source for The Elder Scrolls since 1995
< Online: Places: Bleakrock Isle / Camps / Quest Hubs
Jump to: navigation, search

This article is about the Fighters Guild location on Bleakrock Isle. For the group boss location in the Rift, see Hunter Camp. 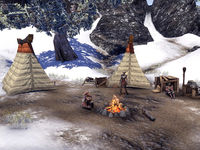 The Hunter's Camp is a Fighters Guild camp in the northwest of Bleakrock Isle. A Fighters Guild member, Bura-Natoo can be found here. She needs your help to rescue three fellow members who have been trapped by the nearby frostbite spiders.