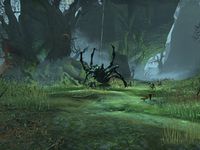 Changelings are rare forest spirits with the ability to shapeshift. They were once prevalent in Valenwood until Y'ffre introduced the Green Pact, resulting in many of them giving up their formlessness to become Bosmer, with those who refused it becoming known as Oathbreakers.[1] Although usually humanoid, a Changeling's powers allow them to assume the forms of many other creatures at will and take on their characteristics.[2] Because of this, they can blend into normal society.[3]

When the woods were new and wild, all Bosmer were shapeshifters who changed from form to form, with this formlessness being called the Ooze.[4] It was a necessity in those times, as the land had not settled on one form either.[5] Y'ffre gave all of Valenwood a form and purpose and decreed the Green Pact, forbidding shapeshifting and harming the green.

The early people of Valenwood did not all accede to the Green Pact,[6] wishing to live their lives as they always had.[2] This caused disagreements with those who accepted, resulting in a civil war.[1] The shapeshifting contingent of the early Wood Elves lost to the other. As punishment for their refusal to give up their shapeshifting abilities and spurning the Green Pact, the Changelings (now called "Oathbreakers" by the rest) were subdued and cursed by Y'ffre, being forced to return to the Ooze.[2][4] Those who accepted the Pact and won the civil war were blessed by Y'ffre and dwelt in the forests.[4] The Bosmer did not want to destroy their spirits, however, as they were their brothers and sisters and still believed that they could one day accept Y'ffre's teachings.[6][7] They were instead contained and buried in the tar-pits of Ouze to be eternally trapped and eternally protected,[1][5][8] in the hopes that they would one day rejoin their people in the time of renewal so that the Bosmer race could be whole again.[5] They could only to rise again if those favored by the Green could release their spirits,[6][7] though where they went and what form they could take upon the return from the Ooze is unknown.[4]

During the Wild Hunt, the Bosmer can return to their chaotic shifting forms, evoking a similar nature to their Changeling ancestors.[9] During the Planemeld, the Worm Cult attempted to raise the corpses of the Changelings in Ouze to serve as their necromantic army of shapeshifters, reversing the spells on the altars that bound them to unbind their spirits.[1][10] The eldest Changeling, Guardian Celonron, protected the grove in death and was powerful enough for the Worm Cult to avoid direct confrontation, yet the other spirits were helpless.[8] Their plan was thwarted by the Vestige, who tampered with their spriggan heartwood rituals and cleansed the stone altars, sinking the corpses back into their rest.[5][2]

The most well-known Changeling is Selene, a High Priestess of Shagrath, the God of Spiders. Selene dwelled deep in the Valenwood in a region known as Selene's Web, and could assume the form of a giant spider. She was soul trapped in 2E 582 by the Mages Guild, and was the first Changeling encountered by the guild in thousands of years.[11] Selene later resurfaced in the Third Era and attempted to conquer all of Valenwood during the Imperial Simulacrum.[12]