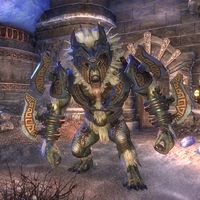 Icestalker is an ice Troll outfitted in scavenged Dwemer armor that serves as the first and only miniboss of Frostvault. It guards the entrance to the Dwemer ruins. During the fight he will be assisted by Ice Scuttler spiders and Ice Wraiths.

One player is stunned and bombarded by Icestalker. The attack cannot be broken free from unless another group member stops it by interrupting Icestalker.

This Online-related article is a stub. You can help by expanding it.
Retrieved from "https://en.uesp.net/w/index.php?title=Online:Icestalker&oldid=2124145"
Categories:
Hidden categories: