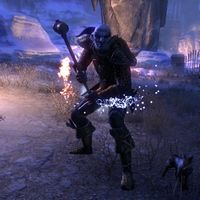 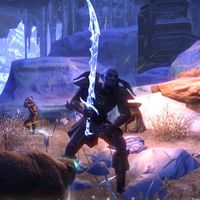 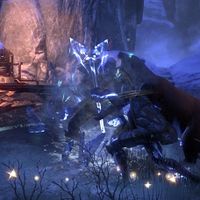 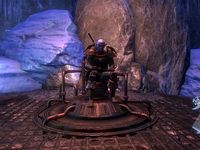 Warlord Tzogvin is the Riekling chieftain of the Coldsnap Tribe that serves as the first boss of Frostvault. He has plundered the soul gem of the Dwemer Excavation Machine and must be killed so that it can be obtained. Landal attempts to negotiate with him, but as Tzogvin's tribe has just been slaughtered by your group, he responds to him only with contempt, and to you with violence.

At the start of the fight, he will use a dwarven warhammer to attack. At some point during the battle, he will throw it away and create a sword out of thin air and jump up, crashing back down and dealing damage. With his greatsword, he uses a variety of flame-based attacks. Later on, he will summon a battleaxe, which grants him access to frost-based attacks and cyclones. If at any point the group is wiped, he will sit back down on his makeshift dwemer throne.

Cyclone
Appears when wielding his axe. A cyclone will start following one player and will deal damage unless sprinted away from. Should also try not to run it into other group members:
Eruption
He uses his sword to summon a rain of fire
Fire Pit
Raging Cyclone
Whirlwind
Tethered
Two players have been tethered and need to walk away from each other to break the tether, or else it will kill them.
Reverberating Smash
Wrecking Blow