The UESPWiki – Your source for The Elder Scrolls since 1995
< Elder Scrolls Online: Places: Clockwork City / Realms
Jump to: navigation, search

Evergloam is the Daedric plane of Nocturnal. Although Crow's Wood, The Shadow Cleft and Exarchs' Egress are also pocket realms of Evergloam, this article is solely about the location visited during the Clockwork City storyline.

The realm is occupied by Nocturnal Shrikes and Whispering Shadows cultists, along with night terrors and various gloam creatures. The book A Sky of Dusk can be found on one of the islets along the southern shore of the region. 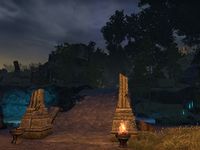 A ruined fortified town with a river running through it. 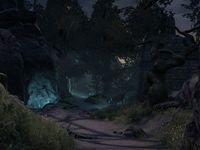 A ruined chapel with a graveyard, perched on top of a large cliff.

This Elder Scrolls Online-related article is a stub. You can help by expanding it.
Retrieved from "https://en.uesp.net/w/index.php?title=Online:Evergloam_(Clockwork_City)&oldid=2223179"
Categories:
Hidden categories: