The original City of the Orcs was built and razed at least three times before King Kurog decided to rebuild in a new location. At Old Orsinium most of the surface city has been obliterated, but there are still extensive ruins underground. 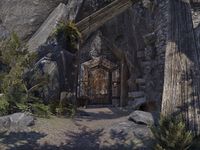 Old Orsinium is an Orcish ruin in Wrothgar. There are numerous enemies inside Old Orsinium, including spiders, bears, hagraven, harpies and echatere. Deeper inside the city ruins you will also encounter Winterborn and Wrathful guardians of Malacath.

On the eastern side of the forges is a door leading to Old Orsinium Shrine, which you need to visit when doing Flames of Forge and Fallen. A southern exit from the shrine will lead you back to the central hub room.

This Elder Scrolls Online-related article is a stub. You can help by expanding it.
Retrieved from "https://en.uesp.net/w/index.php?title=Online:Old_Orsinium&oldid=2177812"
Categories:
Hidden categories: