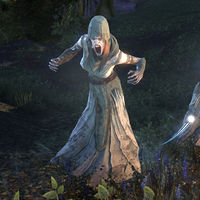 As an elite creature, Wispmothers are immune to all crowd control effects.

The wispmother disguised as Alanya can be found in the cave south of Deep Graves in Shadowfen. Depending on choices you made in the related quest, she may say the following as you enter the cave:

Wispmother : "My love! Protect me!"

Regardless, when you attack, she'll exclaim:

Wispmother : "You've ruined our life together!"