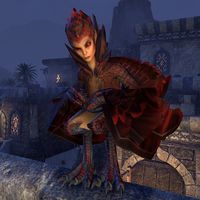 A red harpy perched on a ledge

Harpies are half-bird, half-woman hybrid creatures found all over Tamriel, often in warm climates. They have little intelligence and are usually hostile.

There are two kinds of red harpies. The harpies with brighter red feathers whose crests are folded back neatly in the shape of a briarheart seed appear younger. These bright red harpies have feathered collars that stand straight up. These harpies have no tails. There are also dark red harpies, whose crest feathers appear spaced further apart. These older, darker red harpies wear more jewelry than their counterparts with brighter plumage. The harpies with darker plumage have tail feathers. Harpies with darker plumage have feathers around their neck that jut outwards towards their shoulders, as opposed to the younger harpies, whose collar stands up straight.