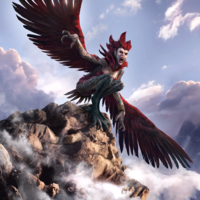 A harpy shrieking
"The hideous harpy, half-avian abomination, is shunned by all the faithful of Tava."
—The Revered Mubdaraz[1]

Harpies are a race[2] of fierce, carnivorous, feminine humanoids with the wings of a bird. They are common nuisance around the Iliac Bay area, particularly in Lainlyn, but are found wherever there are rocky cliffs and crags suitable for their nests. They also build their nests in abandoned ruins.[3][4][5] While their maniacal nature makes them somewhat less-than-brilliant tacticians, their sharp talons and frenzied behavior often force kingdoms to abandon lands to their use.[3] Mercenary groups like the Fighters Guild are sometimes hired to clear out harpy nests for groups that pass through their territory, such as traveling merchants.[6] Harpy feathers are very valuable, prized by tailors and quill merchants alike.[7][5][8] Harpy down can be spun with fine sheep's wool to make a sturdy material for mages' robes.[9] Harpies tend to smell foul.[10]

A potential origin story for Harpies comes from the story of Noctyr-a, whose name may be inspired by the Daedric Prince Nocturnal.[11] The festival of Riglametha celebrates the supposed creation of the harpies, when a group of cruel and beautiful Daedra worshippers of Lainlyn were transformed by a magic robe.[11] Still, some say that the Harpies have knowledge passed on to them from their human fore-mothers: knowledge they may give, but not freely.[3] A thousand generations of inbreeding has long since removed any glimmer of intelligence from the minds of Wrothgarian harpies, to the point where they are closer to giant birds than people.[12]

Harpies live in primitive matriarchal groups and have their own rudimentary language, which mortals can learn to communicate with them.[13][14] Harpies tend to congregate around and venerate the oldest and most powerful individuals of the flock.[5] The clan leaders of some harpy flocks wear specially dyed gryphon feathers.[15] They communicate in a series of shrieks and warbles when they've been disturbed, are mating or are challenged by another. Their voices can be loudly amplified by the wattles beneath their chins.[5] Harpies can sometimes be found serving hagravens.[16]

Harpies are territorial creatures. In battle, harpies make use of their fearsome claws, which can be infected. Harpies can also whip up concentrated gales to hurl at their enemies.[17] Elder harpies can use shock magic.[18] They can be quite silent while circling overhead with their wings spread wide. The element of stealth can allow the creatures to get the drop on their prey.[10] Wrothgar's harpies are particularly vicious; they'll pluck unwary travelers right off the ground.[19]

They behave similarly to birds in some respects. They build nests from clusters of rocks, arranged branches, moss, leaves, and regurgitated spittle.[5] They lay eggs to increase their numbers, and bring back food for their young, which are called chicks.[8] They regurgitate food to feed their offspring.[5] Harpies have a reputation as furious creatures who kidnap, mate with, and kill human males.[3] They are carnivorous scavengers,[20] and don't seem to care what kind of flesh they consume or how fresh it is. Harpies will eat freshly slain prey and week-old carrion without complaint.[5][21]

Despite their reputation as violent creatures who pluck traveling merchants off the side of the road, harpies don't always antagonize mortals. The harpies of Kozanset tend to ignore the townsfolk,[22] and only attack when provoked. Harpies will become aggressive if their eggs are stolen from their nests. Harpies also seem to have a sense of respect for those who prove themselves. Mortals who assist harpies by returning stolen eggs or defending them from assailants may return the favor by fighting off wild beasts or offering shelter.[8]

Harpies played a major role in Captain Blackheart's dominance on the open seas in the Second Era. They protected his island hideaway when the ship was moored, and headed out with the ship when it set sail.[23][24] On the seas, the flock would move ahead of his ship to eviscerate his target while his crew sailed in. This distraction was devastating; few survive the encounter, and Blackheart's crew often found the harpies picking the bones of the victim vessel's crew when they boarded. The harpies were tended by hags, which were rallied by a powerful fire-breathing hagraven.[23]

The Spinners of Marbruk claim that a series of cliffs northwest of the town were once home to a flock of possibly-extinct cockatiel harpies, who carried off young male hunters as mates.[25]