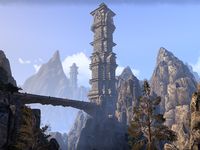 Upper Craglorn, a region located in the northeastern part of the Dragontail Mountains, circa 2E 582

The Dragontail Mountains, (called the Dragon's-Tail in the First Era by Redguards)[1] are a mountain range in northern Hammerfell. They contain the Upper Craglorn region and then curve to the southwest, towards the Fallen Wastes and the Iliac Bay. Politically, the mountains are surrounded by several regions to the east and west. On its western flanks was the Alik'r, Dak'fron, Tigonus, and Santaki. To the east is Lainlyn, Mournoth, Kozanset, and Totambu. The march of Ephesus is located in the middle of the Dragontail Mountains.[2]

The Valley of Blades

The Dragontail Mountains are inhabited mostly by the Redguards and the Orcs, but were also inhabited by the Nedes and the goblins in the past. In the First Era, the goblins of the Dragontail Mountains, led by Warchief Mahgzoor Rockhand, marched through the Fallen Wastes and attacked the great Redguard city of Ojwambu. Even though they seemed numberless, the invasion was eventually repelled thanks to the efforts of the Redguard hero Derik Hallin, who died in the final battle. The city of Ojwambu was then renamed Hallin's Stand after him.[1] The mountains were also inhabited by the Dwemer, who dwelled in their underground cities such as Mzeneldt.[3]

The Abbey of Blades, an ancient training site for Redguard warriors, is located in the mountains in the Valley of Blades. In 2E 582, it was partly damaged in an attack of Mannimarco's minions, however repair work was started by the Abbey of Blades' students.[4] In the same year, the Upper Craglorn region in the northeastern part of the mountains fell under the influence of the Celestial Serpent.[3]

The Empress Kintyra Septim II crossed the Dragontail Mountains with an army during her ill-fated attempt to crush her aunt, the Wolf Queen Potema, during the War of the Red Diamond.[5] In the late Third Era, before the Warp in the West, the Dragontail Mountains were considered a political entity, whose capital was the city of Dragontail.[6] During that time, Mannimarco's headquarters, Scourg Barrow, was located in the region. During the War of the Bend'r-mahk, parts of Upper Craglorn, along with half of the city of Dragonstar, fell under the control of Skyrim.[7]

Legends say that Diagna, the Orichalc God of the Sideways Blade, resides within the mountains.[8]

The Scenarist Guild is based out of a citadel nestled high in the mountain range, protected from trespassers by a magical barrier.[9]