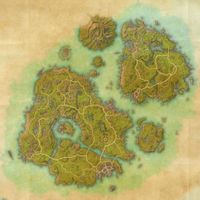 The Systres (also the called the Systres Isles,[1] Systres Islands,[2] Systres Archipelago, and formally the Duchy of Systres)[3] are a group of four large islands in the Abecean Sea, far to the southwest of Hammerfell and northwest of Summerset Isle.[4] It is one of Tamriel's westernmost regions.[5] The largest island is named High Isle, while the jungled prison colony of Amenos lies to the north.[6] The third island, Y'ffelon, is north of High Isle and northwest of Amenos. It contains a semi-dormant volcano.[7] The fourth island is Galen to the northwest, where House Mornard operates from the city of Vastyr.[8] The nearest islands are Pankor to the northwest and Eyevea to the southeast; another group of three smaller islands are found directly west, southwest of Pankor.

According to legend Sorrows of the Wind, the Systres was first home to ancient nature spirits of that were either Man or Mer in appearance. When the mortal races started to settle on the archipelago, they remained but stayed hidden.[9]

The Systres were first settled by Y'ffre-worshipping Druids of Galen around 1E 330, fleeing the power struggles between the rising Direnni Hegemony and Alessian Order. These Breton druids supposedly followed "a song on the wind", which led them to the island of Y'ffelon, though other legends state they were guided by an Elder Scroll. The druids claim they used the power of the Earthbones to transform the volcanic Y'ffelon into a verdant paradise. After this the druids set out across the Eltheric Ocean, transforming the nearby islands as well. During this golden age the druids fractured into the Stonelore, Eldertide, and Firesong Circles.[1]

Around 1E 660 the Systres were invaded by the Lefthanded Elves, who set out to conquer the Systres.[10] The Elves constructed a fortress on the isle of Amenos and set out to conquer the other island from there, but the war ended prematurely with the eruption of Mount Firesong on Y'ffelon in 1E 676, which devastated the Elves and seemingly wiped out the druids.[10][1] It is suspected this was a disastrous result of a miscalculated spell spiraling out of control.[11] It was comparable to the Sun's Death disaster of 1E 668, and may have even been related given the corresponding dates.[1]

The remnants of the Lefthanded Elves continued to inhabit the Systres until the Ra Gada arrived in 1E 785, wiping out the Elves before continuing on to Hammerfell.[1]

In 1E 2241 the Colovian King of Anvil, Bendu Olo, called for a fleet to sail against Thras and avenge the Thrassian Plague. Olo was soon joined by the other nations of Tamriel, and the fleet was dubbed the All Flags Navy.[12] The largest shipyards for this new navy could be found on the Systres, centered around Gonfalon Bay and All Flags Islet After the destruction of Thras by the Navy in 1E 2260 a group of Breton and Colovian engineers and laborers remained behind on the Systres, as they had been ordered to construct a monument to the All Flags Navy. This grand edifice would not be completed until more than twenty years later, by which time the laborers had brought over their families and founded villages around the shipyards. Despite the high Breton influence the islands became a part of Colovia as one of Bendu Olo's holdings. When High Rock seceded from the Empire several decades later in 1E 2305 the Colovians refused orders from the emperor to exile its Breton population, claiming it to be too costly.[1]

When Colovia followed High Rock's example and declared independence in 1E 2321, the War of Righteousness broke out.[13] The cost of the ensuing war forced the Colovians to put non-essential territory, leading a group of Breton coin-barons led by Duchess Martinne Guimard to purchase the Systres for an undisclosed sum in 1E 2327. When Duchess Guimard visited the Systres for the first time the following year she dubbed its largest island "High Isle" after the Breton homeland of High Rock.[1]

House Guimard ruled the Systres for one hundred and fifty years before falling into disfavor ecause of a jilted marriage proposal, leading the islands to fall into the hands of House Mantel. House Mantel's reign was short-lived however, as in 1E 2484 Mount Firesong erupted once more, shattering the shipyards, damaging the All Flags monument, and claiming the lives of nearly one-third of the archipelago's inhabitants, including nearly all of the nobility. Calls for aid to the mainland were ignored, and the Systreans soon found themselves facing starvation and illness, killing thousands. Systrean society was on the brink of collapse when the druids of the Stonelore Circle resurfaced, providing the people with food and fresh water. This prompted a short, but significant renaissance of druidic faith known as "the Green Years". While the druids did not reestablish their rule over the islands they did earn a place of respect and bolstered ranks.[1]

The Systrean pastoral renaissance ended on 11 Sun's Dusk, 1E 2704, when emissaries of the newly formed Reman Empire arrived in Gonfalon Bay and declared the Systres the lawful property of Cyrodiil. This annexation saw the return of the Breton coin-barons, who returned the Systres to feudal rule. Several revolts broke out against Imperial rule, most prominently by the Eldertide Circle, but none were successful.[1]

In 2E 11 Akaviri Potentate Versidue-Shaie converted the isle of Amenos into a penal colony for Reman-aligned political prisoners, who would be forced to work in the larimar and ammonite mines.[1] In 1E 110 the Breton House Mornard emigrated to the Systres,[14] followed in 1E 125 by House Dufort.[15] Both houses soon established mercantile empire on the Systres, and would eventually be granted noble titles, with House Mornard becoming Dukes of the Systres as vassals of the Gardner kings of Wayrest and lieges of the Dufort Barons.[14]

The following years saw the partnership of the two houses devolve into a rivalry, attributed by some to the madness of Baron Densil Dufort,[15][16] which was only exacerbated by the start of the Interregnum in 2E 430. House Mornard and House Dufort's jockeying for power in the court of Wayrest eventually came to a head in 1E 478, when Duke Ruffe Mornard seized a full third of House Dufort's lands and exiled its leadership to Amenos, claiming sedition against the crown with a raft of forged documents and forced testimony. The Gardners viewed the coup with suspicion but were unable to interfere due to troubles with an ascendant Camlorn.[1]

In 2E 563 the Knahaten Flu reached the Systres, slaying commoner and noble alike. Duke Avrippe Mornard ordered the archipelago sealed off in 2E 565, causing trade to stagnate, which caused Duke Avrippe to fall into disfavor in Wayrest's court. When King Ranser of Shornhelm attacked Wayrest in 2E 566 Duke Avrippe allied with him, forsaking ties of vassalage, but King Emeric of Wayrest managed to bring together an alliance to defeat Ranser. Once matters on the mainland were settled and Ranser had been defeated Emeric turned his eyes to the Systres, stripping Duke Avrippe of his titles and exiling him to Cyrodiil. The duchy was granted to House Dufort, while Avrippe's son Leonard was left with a county and rule over the island of Galen.[15][1]

In 2E 582 peace talks were held on the islands by the main participants in the Three Banners War, which came under attack by the Ascendant Order[17]

The islands were considered by the Empire to be Hammerfell's territory in 2E 864.[18]

High Isle
The largest island of the Systres archipelago, known for its idyllic countryside and sunny coastline
Amenos
The second-largest island, resource-rich and covered in jungles. It is a territory of House Mornard and functions as one large prison
Y'ffelon
The third island, dominated by Mount Firesong. It is the home of the Firesong Circle of druids, who maintain the volcano
Galen
A fourth island, found to the northwest. The Count of House Mornard administrates house concerns from the city of Vastyr

All Flags Islet
An island surrounded by High Isle's great basin and where the All Flags Navy assembled their fleets
The Colossus of Gonfalon Bay
A giant edifice of Baron-Admiral Bendu Olo built south of Gonfalon Bay
Dreadsail Reef
A far-off islet surrounded by jagged rocks and inhabited by deadly predators. It was previously untouched for years until it was occupied by the Dreadsail pirates
Shipwreck Shoals
A small mountain surrounded by shoals. It is known for its dangerous waters and shipwrecks that gave it its namesake
Spire of the Crimson Coin
A Breton fortress on a large island south of Amenos and northeast of Loch Abhain
Whalefall
A jungle-covered island south of Y'ffelon. It has been mainly used by the jailors on Amenos Station