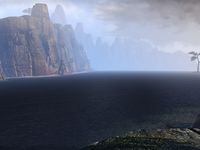 The Bjoulsae River is a major river that forms most of the border between Hammerfell and High Rock. It is the home of the River Horse Bretons, tribes of nomadic Bretons[1] that live throughout the river and nearby Bangkorai.[2] The river's water source is the vast Halcyon Lake, found in the dead center of Mournoth. The river advances southwest pass the kingdom of Evermore until it empties into the Iliac Bay.[3] There are two rivers that empty into the Bjoulsae River: one is the Jugular from the north somewhere east of Wind Keep,[4][5] and the other is the Yrinthi River, which is infested with pirates like the Bjoulsae and the Iliac.[6]:5 Rowboat racing throughout the Bjoulsae River has been a popular pastime for centuries.[7] 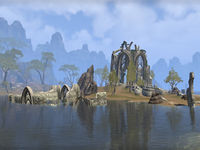 In the early years of the First Era, High King Vrage of Skyrim sought to expand his empire west into High Rock to liberate the proto-Bretons from the Aldmer of the Direnni Hegemony. His initial campaign only took him as far west as the Bjoulsae River, but anything beyond that was out of the Nords reach.[1] However, sometime later their conquest expanded all the way west to what is now modern-day Daggerfall by 1E 246.[8]

Sometime after their exile from Cyrodiil, the Ayleid King of Nenalata, Laloriaran Dynar and his people traveled to the Bjoulsae River and were eventually welcomed by the Direnni. In that time, they built their new city, Bisnensel and even made peace with the local Bretons and the Orcs. These events took place between 1E 375 and 1E 452.[9]

As early as 1E 800, the hamlet of Wayrest was built on the mouth of the Bjoulsae River, merely a rudimentary collection of huts.[1][10] In that time, it was constantly harassed by the Orcish war parties from their village-fortress to the north, Orsinium and the Akaviri pirates from the islands to the west. By then, the Orsimer had gained serious control over Stormhaven and may have even built a settlement in the name of their king, Golkarr.[11] They were determined to control the Bjoulsae River when some of their own were displaced by the Ra Gada in the south.[12] It was the former's constant raids that inspired King Joile of Daggerfall to write a letter to Gaiden Shinji in 1E 948. When the Siege of Orsinium ended in 1E 980, the destruction greatly opened trade in the Bjoulsae River, resulting in the formation of the Masconian Trade Way. It was created by the hard-working traders and merchants of the Bjoulsae River, and not only did it bring about a decline for piracy, it also led to a great expansion of the Bjoulsae's trade and community.[10] One such factor that contributed to this was Daggerfall's ivory trade, which came from plundered ivory from Orsinium.[13] 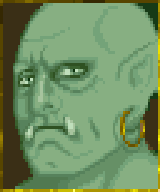 At this point, Wayrest controlled both sides of the river bank and the merchant family, the Gardners built a walled palace on the north side of the river. Their palace served as the basis of the modern city as many buildings and banks were built around it. Wayrest became a kingdom in 1E 1100 and their first King was Farangel Gardner.[10] Meanwhile, further into the Bjoulsae River, the River Horse Bretons built their own city and trading hub called Evermore in 1E 983.[2]

After the destruction of Evermore and Hallin's Stand in 2E 541, the Reachmen horde led by Emperor Durcorach crossed the Bjoulsae River and laid their eyes on Wayrest. The Siege of Wayrest, as it was called lasted for fifty-seven days since they did not have siege weapons to breakdown the walls, nor ships to sail into the city's harbor. The Black Drake left some of his forces in Wayrest and continued west toward Glenumbra. Unbeknownst to them, Earl Emeric of Cumberland took his soldiers on merchant trade ships to rendezvous with King Bergamot in Daggerfall.[14]

Tiber Septim's campaign over High Rock brought the Imperial Navy to the Bjoulsae River, in an important conflict called the Battle of the Bjoulsae. The navy led a surprise attack on Wayrest's naval forces and crushed them at dawn. Amiel Richton led a squadron during the battle before he succeeded Vasi Hadrach as an Admiral and before his resounding victory in the Battle of Hunding Bay.[15]

When strange reports of King Lysandus' ghost roaming Daggerfall began to reach Emperor Uriel Septim VII in 3E 405, he sent an agent of the Blades to quell the spirit. They traveled down the Yrinthi River from deeper in the mainland via an inconspicuous ship to avoid pirates and into the Bjoulsae River. From there they traveled to the Iliac Bay until they were stranded by an unnatural storm and washed up onto Privateer's Hold.[6]:5 Their exploits in the Iliac Bay had led up to the events of the Warp in the West in 3E 417, on the 9th of Frostfall. On that same day, an ambassador of the Emperor, Naigon Strale sailed down the Bjoulsae on an Imperial barge and passed by the river village of Candlemass. At that moment, a large tidal wave passed through the coast and sunk the barge among many others. Not long after, the north Bjoulsae region and most notably Gavaudon was caught in a battle between Wayrest and Orsinium. Many villages were caught in the crossfire and were burned down. The King of Orsinium, Gortwog gro-Nagorm took profitable portions of the Bjoulsae Rivercoast.[16]

The south side of the Bjoulsae River is part of the province of Hammerfell, until it extends northeast toward Evermore and Halcyon Lake, which is already part of High Rock. The Hammerfell side of the river mouth is a forested region east of the Dragontails. It contains political entities associated with the Crowns, which includes the Barony of Lainlyn, the County of Satakalaam, and the Fiefdom of Mournoth.[17] All of them were absorbed into Sentinel, the Kingdom of Forebears in the wake of the Warp in the West.[16] King Lhotun took many precautions to make sure they were kept under his control but a rebellion ensued with the True Crowns of the north, near Elinhir.[18] There is a small portion of the Alik'r Desert that is located on the tip of the river mouth, north of the minor city, Satakalaam and the valley of death, the Motalion Necropolis.[19] 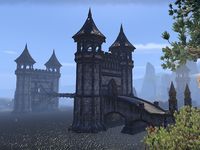 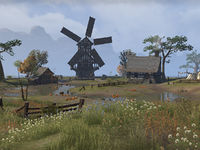 The Flooded Plantations of Gavaudon

The north side of the Bjoulsae River and further inland is part of High Rock. It runs alongside the southern coast of Stormhaven, around the Kingdom of Wayrest and later the Fiefdom of Gavaudon to the east of it. It is said that the plains of Gavaudon are flooded by the waters of the Bjoulsae and that they provide very rich soil. It attracts the hard-working class of farmers who can withstand the cold and wet temperatures. The region has been known to have been raided by Orc war parties.[20] There is several aquatic fauna that lives on the north side of the river such as the common crocodile, but also river fish like the Dreugh Shrimp, the Grass Carp, and the River Stingray. In the halfway point between the river and the Iliac Bay are sea fish such as the Alcaire Pike, the Dab, and the Stormhaven Flounder.[21]

The river advances northeast into the mainland region of Bangkorai. There is a large drawbridge that connects Stormhaven with Bangkorai and leads directly to the city of Evermore, which sits right on top of the river. At this point, the Bjoulsae River tightens into its original cascading streams and boats can no longer navigate further in. Evermore is the last stop on the trade route, but it is a nexus that branches High Rock proper with the north wastes of Hammerfell, and neighboring cities such as Orsinium to the north, and Skyrim's city-states, Dragonstar and Markarth to the east.[22] There is a bountiful supply of fish from this point, ranging from saltwater fish like the Bjoulsae Hake, the Morid Cod, the Swai, and the Toadfish. There is also river fish from the northeast such as the Prickleback, the Lenok, the Panga, and the Pupfish.[21] As stated before, the Bjoulsae River continues northeast into the wilderness of Mournoth until it reaches Lake Halcyon. Along the way are minor settlements like the fishing village, Murcien's Hamlet and the farming community of Northglen. 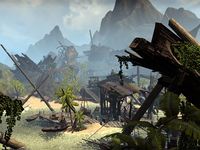 There are dozens of small islands throughout the mouth of the Bjoulsae River that are used by sea raiders and smugglers as hideouts or safe refuges.[23] Akaviri pirates have been known to inhabit some of these islands since at least the early First Era.[10]