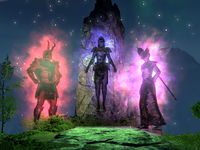 The three Guardian Celestials: the Warrior, the Thief, and the Mage

Celestials were first created in the Merethic Era by the ancient star-worshipping Nedes of the Deathlands. The kings of Skyreach in Upper Craglorn constructed a great laboratory at Skyreach Pinnacle, where they used nirncrux to harness the power of the stars. At first, they created only weak Celestials that mimicked mundane animals and Daedra. These ranged in power from the lowly Celestial Spiders to the fearsome entity known as Aetherion. All of these volatile creatures were bound within the Pinnacle by Nedic wards, and the tower was later sealed by the Yokudan invaders that conquered the region circa 1E 808.[1]

The origin of the more powerful humanoid Celestials is completely unknown. It seems likely that they were Nedes who were imbued with nirncrux and ascended to take their place in the sky,[1] although this would call into question whether the Constellations are a mortal creation or if the Nedes simply mantled them. More established myth claims that the stars were formed by the Magne Ge fleeing Creation and creating holes to Aetherius.[2].

Regardless of their origins, the Constellations fell from the sky in 2E 582 and took on mortal form as Celestials. As is his nature, the Celestial Serpent used this opportunity to attack the other Celestials by corrupting the Guardian Constellations through their Nedic Apex Stones. Quickly establishing a cult known as the Scaled Court, the Serpent gained control of the Celestial Mage beneath the city of Elinhir and the Celestial Warrior in the Ruins of Kardala. Under his influence, the Mage took control of an army of atronachs that had been summoned to the region recently to repel Molag Bal's Planemeld, and created the powerful new Air Atronachs and Foundation Stone Atronachs, before being sundered into many aspects scattered throughout Craglorn. The Warrior was forced to summon Emperor Tarish-Zi from the past so that he could raise an undead army of Anka-Ra warriors from the many Yokudan tombs in the region, but not before he summoned his own champion, a contemporary Nedic warrior named Titus Valerius. A great celestial obelisk known as the Mage's Staff also crashed to Tamriel at that time.[1]

As the only guardian remaining, the Celestial Thief hid her Apex Stone in the ruins of Reinhold's Retreat beneath the city of Belkarth. She then assumed the guise of a blind Redguard woman named Hara, and took control of the Star-Gazers. Recruiting scholars and warriors from across Tamriel, Hara sent the Star-Gazers to search for the missing Guardians and prevent more Anka-Ra from being summoned. With the help of Kelmen Locke, the only surviving summoner of the atronach army, the Star-Gazers managed to locate the uncorrupted aspects of the Mage so that they could overpower the Serpent; the restored Mage subsequently fled to the Aetherian Archive in an attempt to escape Time. Meanwhile, Titus Valerius helped the Star-Gazers return Tarish-Zi to his grave. However, the Serpent soon learned of the Thief's location and attempted to corrupt her, but was prevented by Locke, Valerius and the Vestige.[1]

After being forced to reveal her true identity, rumors of the Thief's appearance in Belkarth drew the attention of the Undaunted. Groups of Undaunted launched an assault on the Aetherian Archive and Hel Ra Citadel to free the Mage and the Warrior from the Serpent's influence. Regardless of this, the Serpent continued his attempt to raise armies, planning to return Nirn to a primal state. However, the Scaled Court was betrayed from within by Cassipia, the Regent of Serpentine Stratagems. Along with her companion Little Leaf, Cassipia secretly worked alongside the Vestige in stopping the Court's creation of mantikora and dismantling the Iron Orcs' attempt at raising an army of primal, nirncrux-infused trolls. Cassipia's true motives were revealed when she subsequently declared herself the Exalted Viper and sought to usurp the Serpent's place in the sky. She briefly succeeded in becoming a Celestial, but was killed in battle against the Thief and the Vestige. The Undaunted later entered the Scaled Court's stronghold of Sanctum Ophidia and defeated the Serpent.[1]

The wards at Skyreach Pinnacle were also broken by the Scaled Court that year, but were quickly resealed before the Celestials could escape.[1] The fallen Constellations later reassumed their place in the sky.