The UESPWiki – Your source for The Elder Scrolls since 1995
< Lore: Gods: H
Jump to: navigation, search 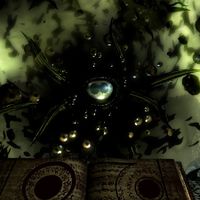 Hermaeus Mora as he manifests in his realm of Apocrypha (Dragonborn)

"I am Hermaeus Mora. I am the guardian of the unseen, and knower of the unknown. I have been watching you, mortal." — Hermaeus Mora[1]

Hermaeus Mora (or Herma-Mora, among others[nb 1]) is the Daedric Prince whose sphere is the scrying of the tides of Fate, of the past and future as read in the stars and heavens, and in whose dominion are the treasures of knowledge and memory.[2] He describes himself as "The riddle unsolveable. The door unopenable. The book unreadable. The question unanswerable."[3] He is vaguely related to the cult origins of the Morag Tong if only by association with his sibling, Mephala.[4] Apocrypha is Hermaeus Mora's plane of Oblivion, an endless library where all forbidden knowledge can be found. The books all have black covers with no titles, and the library is haunted by ghosts forever searching for knowledge. Unlike most Princes, Hermaeus Mora does not take on a humanoid form at all, manifesting instead as grotesque assemblages of eyes, tentacles, and claws, or a featureless purple vortex known as the Wretched Abyss. His servants include Seekers and Lurkers.

Herma-Mora was an ancient Atmoran demon who, at one time, nearly seduced the Nords into becoming Aldmer. In Atmoran myth he is known as the "Woodland Man" who catches villagers lost in the woods; the secondary set of his name, Mora, is one word for "wood", "woodland" or "tree(s)" in Elvish. Most Ysgramor myths are about escaping the wiles of old Herma-Mora.[4][5] His enemies are Ebonarm and Vaermina and his summoning day is 5th First Seed. The Hero of Daggerfall quested for the Oghma Infinium by summoning Hermaeus Mora.

Hermaeus Mora's shrine in Cyrodiil is located deep within the mighty Jerall Mountains, where he is said to speak only to the most worthy of mortals in a deep, frightening and almost convoluted way. He once asked the Champion of Cyrodiil to bring one soul of each race to him so his followers could use them in rituals to explore the realms of reality as well as space and time, once again offering the Oghma Infinium as a reward.

It was later revealed that Miraak, the First Dragonborn, had learned his secret powers from Hermaeus Mora in exchange for a life of servitude in Apocrypha. By the return of the dragons, however, Miraak had largely abandoned his master and decided to return to Tamriel by way of Solstheim. After raising an army of cultists and attempting to kill the recently revealed Last Dragonborn, Miraak bewitched much of the populace of Solstheim and forced them to build otherworldly structures around the All-Maker Stones on the island, which would be used to increase his power and provide a conduit to return to Tamriel. The Last Dragonborn tracked Miraak's activity to his temple and inside found a Black Book, an artifact of Hermaeus Mora. The Last Dragonborn destroyed Miraak's influence on the island and entered Apocrypha through the Black Books, meeting Hermaeus Mora himself.

Mora told the Last Dragonborn that he was growing tired of using Miraak as a servant, and offered off the dragon shout he provided to Miraak, in exchange for an important piece of knowledge. This knowledge was the ancient religious traditions and powers of the Skaal, who had faithfully kept it from Mora for generations. The Last Dragonborn had to convince the spiritual leader of the Skaal, Storn Crag-Strider, to give up the knowledge, which killed him as it was removed from his body. Their end of the bargain fulfilled, the Last Dragonborn gained the new shout from Mora and went back into Apocrypha to face Miraak. Upon defeating him, Mora appeared again and expressed his disappointment with Miraak, declaring the Last Dragonborn to be his new champion.

The front cover of the Oghma Infinium (Skyrim)

The Oghma Infinium is an ancient tome of knowledge, and an artifact of great power. It was written by Xarxes, the scribe of Auri-El, who had been granted the knowledge within by Hermaeus Mora. The name of the tome comes from Oghma, the wife of Xarxes, whom he created from his favorite moments in history. The knowledge within the tome grants the reader access to the artifact's energy, which can be manipulated to achieve near demi-god abilities. The Paths of Steel, Shadow and Spirit are the three main sections of the tome. Once the Oghma Infinium is used, it disappears from its owner's possession. Through the reading of Black Books, individuals can obtain much more power than that gained from the Oghma Infinium alone. 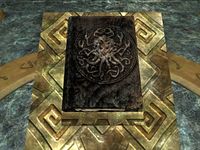 The front cover of one of Mora's Black Books (Dragonborn)

Black Books are Daedric artifacts created by Hermaeus Mora, the Daedric Prince of Fate and Knowledge. Each book contains some manner of forbidden knowledge. Some books are from the ancient past; some are from the future. The thick tomes are bound in black covers, with a symbol representing Mora on the front, and emit a black mist. They are comparable to the Oghma Infinium, another tome of knowledge created by Mora; however, through the reading of the Black Books, individuals can obtain much more power than that gained from the Oghma Infinium alone. The books were spread across Tamriel by Mora, and are usually located in the depths of ancient dungeons.

Through reading a Black Book, the reader will enter Apocrypha, the realm of Oblivion created and ruled over by Hermaeus Mora. Tentacles will emerge from the tome and envelop the reader. An apparition of the reader's body remains in Mundus, tethering their life force. Most mortals who read a Black Book are driven insane, but those who successfully journey through Apocrypha are known to discover powerful knowledge. Dying in Apocrypha while reading a Black Book simply banishes the reader back to Tamriel. Rereading a book will return the reader to the same area of Apocrypha, allowing them to attempt Mora's gauntlets again or harness the power of a different piece of knowledge. Copies of the contents of Black Books can be made without entering Apocrypha.

Apocrypha is a realm of Oblivion created and ruled over by Hermaeus Mora, the Daedric Prince of Knowledge and Fate. It is an endless library consisting of untitled books with black covers, where all forbidden knowledge can be found. The realm is haunted by the ghosts of mortals forever searching for knowledge. Stacks of books form mazes and spiraling pillars that can reach as high as the illuminating green sky. Intricate ruins and monstrous carvings can be found among the stacks. The plane is covered in a sea of ink and roiling tentacles, while Hermaeus Mora is omnipresent over all. Some areas of the realm are consumed by darkness which can kill any who enter it. Discarded pages and floating tomes fill the air.

Apocrypha is inhabited by the frightening Daedric servants of Mora. Seekers guard forbidden knowledge, banishing foes with sound attacks. Lurkers dwell within the inky tide, arising from the depths to attack invaders. Disembodied tentacles hide in the waters and hang from the sky, whipping at any who pass.

Apart from magical teleportation, Apocrypha is most easily entered by mortals through the reading of Black Books, tomes of forbidden knowledge displaced from time and scattered across Tamriel. An apparition of the reader's body remains in Mundus, tethering their life force. Most mortals who gain access to the secrets within Apocrypha are driven insane by unending revelations. Such was the fate of the mage Morian Zenas, who famously disappeared in Apocrypha during his voyages through Oblivion. However those who successfully journey through Apocrypha are known to discover powerful knowledge.