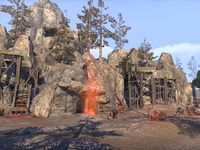 An Iron Orc nirncrux mine

The Iron Orcs are an isolated Orcish civilization native to the Dragontail Mountains of Craglorn. They are known for their stone worship and their savage brutality, and are based in the Nordic ruins of the Valley of Scars. They tame Welwas and Trolls as war beasts, and primarily use iron arms and armor. They are culturally separate from other Orcs, and possess their own language.

The origin of the Iron Orcs is unknown. Similar to the Wood Orcs of Valenwood and the Orcs encountered by Topal the Pilot in High Rock,[1][2] the Iron Orcs may have inhabited Craglorn since time immemorial. However, the creation story of mainstream Orc society claims that the Orcs were originally Aldmer followers of Trinimac, who were corrupted when their god was transformed into Malacath.[3] The ancestors of the Iron Orcs were originally a peaceful shamanistic society of primitive stone worshippers. These cave-dwelling Orcs had rich cultural exchanges with the ancient Nedes of the Deathlands sometime in the Merethic Era. By the late Merethic, however, the Nedes of the region had mastered basic metallurgy. After a long peroid of estrangement, war broke out, and the Nedes used their newfound weapons and arms to attack and conquer their Orcish neighbors.[4]

Faced with assured destruction, the ancient Orcs were forced to defile their sacred stones in order to mine iron. It is theorized that this corruption of the stones led to a fundamental shift in Iron Orc society. The Iron Orcs became a civilization of miners, smiths and warriors, whose anger at outsiders was fueled by their own self-hatred. Contemporary burial pits show evidence of civilian corpses who had been crushed and brutalized in death by the Orcs.[4] Over the years, this mentality continued to permeate their society, and the Iron Orcs earned an infamous reputation from pillaging the settlements of Craglorn. Early in the Second Era, the fear of Iron Orc raiders was exploited by the Blackcaster Mages Guild, who seemingly hired a band of Orcs to threaten the city of Elinhir so that the mages could take control of it.[5]

In 2E 582, the constellations fell from the skies over Craglorn and assumed mortal form as Celestials. In his plans to remake Nirn, The Serpent sought to raise armies to his cause. The Iron Orcs were among those targeted by his corrupting influence. The Orcish shaman, Lashburr Tooth-Breaker, attempted to advise chieftain Braadoth against allying with the Serpent and his Scaled Court, but he was deposed and replaced by his rival Agganor. Braadoth was indoctrinated into the cult and appointed as the Ophidian Exarch of Undulating Destruction.[1] The Iron Orcs quickly began mining for nirncrux, and infusing it into the skin and armor of their trained trolls to make an army of titanic, primal trolls. Descending from the mountains to establish their mines, the Orcs quickly became a serious threat throughout Upper Craglorn, going so far as to attack trade caravans to feed travelers to their trolls. However, they were soon betrayed on both sides. Lashburr sought to restore his people's faith in the stones, and recruited the aid of the Vestige in driving the Scaled Court out of the Valley of Scars and placing Agganor's head on a pike for all to see. At the same time, Braadoth was betrayed by Regent Cassipia, who sent her companion Little Leaf to kill him and steal the Orcs' research on nirncrux infusion. Together, the Vestige and Little Leaf entered the Valley of Scars and killed the leaders of the Iron Orcs, ending the threat of a troll army.[6]

Despite the removal of the Serpent's influence, it has been theorized that the cultural shock of ironworking is one too deep to ever truly recover from, and an internal shift in psyche remains a long way off for the Iron Orcs.[4]